Deepest Team in the Nation Making a Deep Run 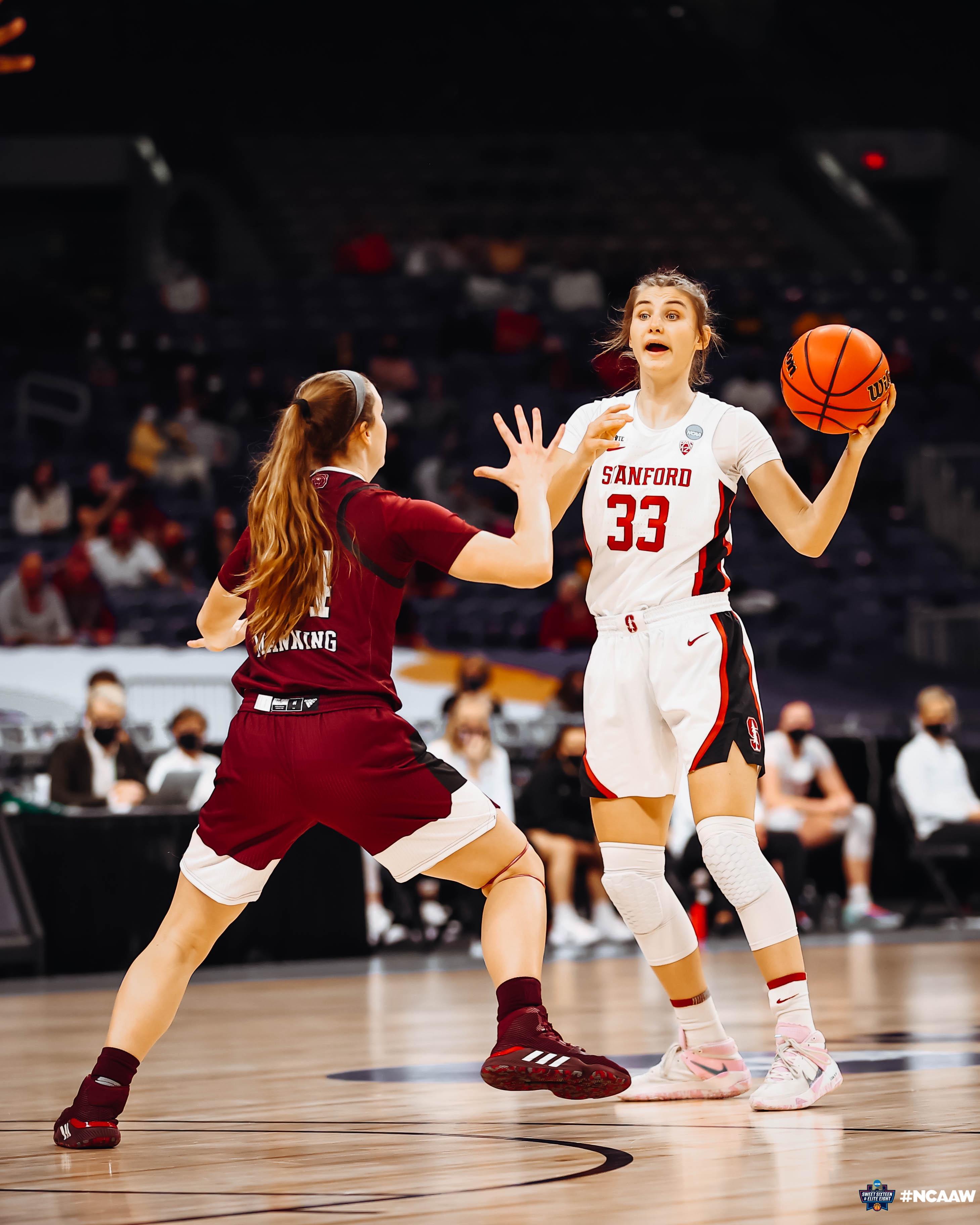 I mean, who doesn't have fun winning by 27 points? Putting away the Lady Bears 89-62, Tara and the Cardinal are headed to the Elite Eight once again!

Leading the charge in today's route was fifth year senior guard Anna Wilson, who had 13 points on 5-6 shooting, 6 rebounds, and 3 clutch steals. Wilson's defensive prowess has been a consistent boon for the team this season, and to see her contributing on the offensive side too bodes well for Stanford as they advance.

On finding her stride on offense late in the season Wilson remarked, "[Tara] didn't recruit any of us for our defense. And so I think for me it's just trying to find time to be aggressive."

Just as Tara is in Wilson's mind, Wilson is in Tara's. After grading their last game a "C" overall, Tara gave today's effort a "B" but quickly caveated, "but I thought we had an absolute A game from Anna Wilson. A for Anna."

Freshman forward Cameron Brink added 7 points and 5 monster blocks (we're talking Suez canal caliber blockage). Hometown hero Kiana Williams gave 16 points on 50% shooting, much to the delight of the formidable family fanbase of fifty watching her from the stands. Ashten Prechtel was impressive with 8 points, 10 rebounds, and 5 assists off the bench.

On a team level, it must be noted the Card have been absolutely raining down threes in the NCAA tourney. They were 15-33 against Utah State, 13-25 against Oklahoma State, and now 15-32 against Missouri State. Perhaps more impressive is the diversity of the shooters who are draining them. Today's game saw seven players drain a deep ball. Hannah Jump came off the bench and transformed into a literal gunslinger, hitting 5 of 7 from behind the arc. Have a see for yourself:

But enough about basketball, we here at Channel Tree know the people really want to talk about PING PONG. Yes that's right, if you haven't been following the nation's most exhilarating story, the Stanford Women's Basketball Team has been spending some of their bubble free time in a Ping Pong Tournament of Champions. After one of William's family members dropped off an old ping pong table for the team to use, a bracket was quickly developed and it's all I or any of the media members in the presser could talk about. Who's the best table tennis player? How do the staff stack up against the players? The drama! The intrigue!

Fear not, reader, because Channel Tree has the insider scoop!

Anna Wilson on who the best ping pong player is:

Lexie Hull is very, very good. Hannah Jump, obviously you know her 3 is spectacular... and she has really big hands. I think the way she handles the paddles is the reason why she's so good. She has a great backhand and forehand. And I think the sleeper might be Seal (referring to Celia Marfone, the team's first-year video coordinator).

Coach Tara on who is in the Final Four:

Celia Marfone is in it along with Hannah Jump and Lexie (Hull) and Ashten (Prechtel). Ashten has a wicked backhand; she knocked me out, coach added, implying that the seeding was rather unbalanced.

This is clearly a team that has fun on and off the court, an essential ingredient in a winning recipe for a season that has been so isolating, especially for these road warriors. Channel Tree looks forward to the conclusion of the ping pong tournament in the next couple of days. Who you got?

Up next for Stanford is an Elite Eight matchup with either the 6 seeded Oregon Ducks or the 2 seeded Louisville Cardinals. If the former, Tara can take comfort in facing a familiar foe whom her team has defeated twice this year (70-63, 63-61). If the latter, get ready for the announcers to commit the sin of pluralizing "Cardinal" to "Cardinals" at least one hundred times. Either way, that game will take place on Tuesday 3/30 at 4PM PT. Tune in to see if Stanford can make their first Final Four since 2017, when I was Treeing in the arena.