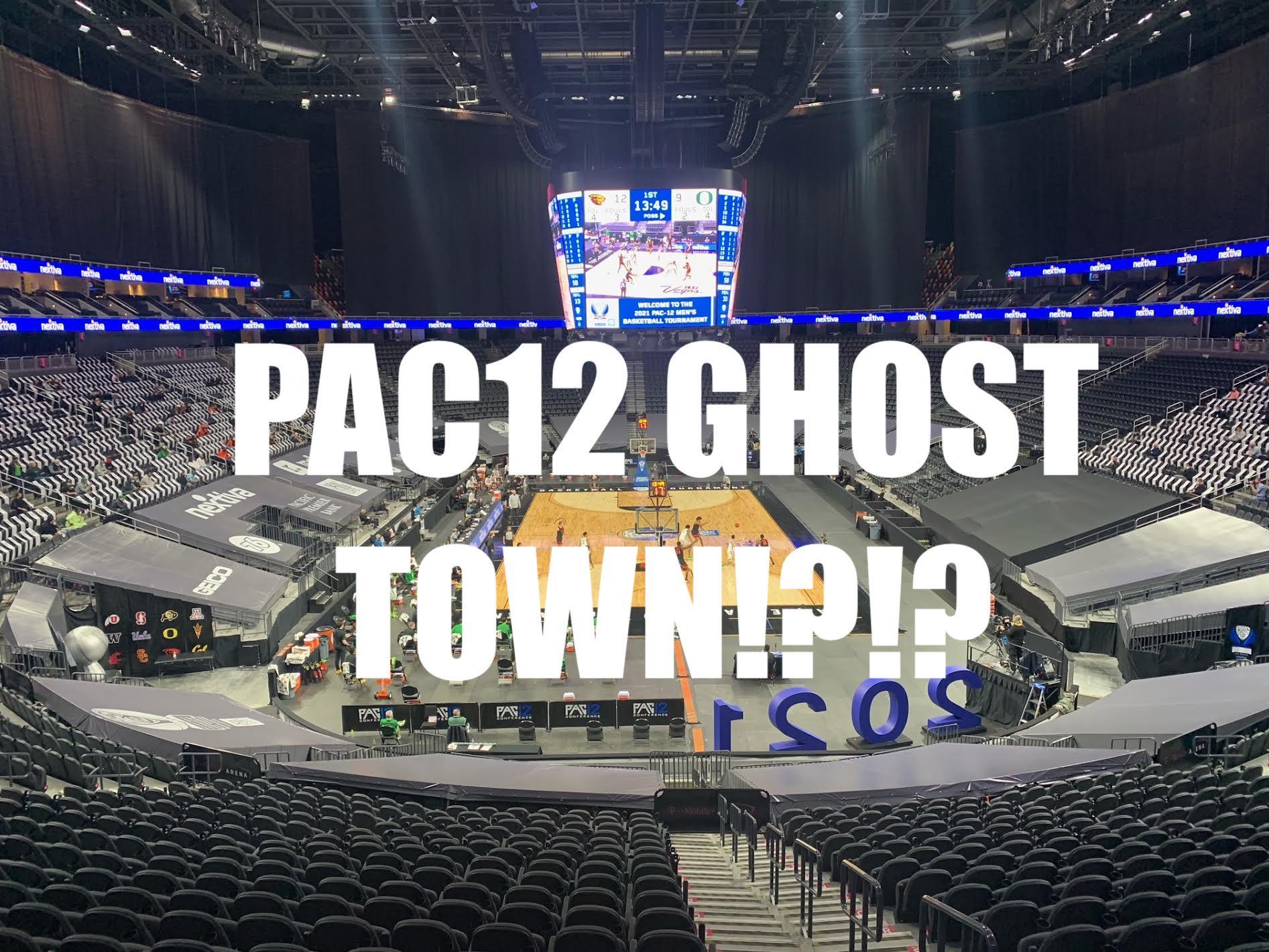 
Another year, another crippling loss to Cal in the Pac-12 Championship (pour out some kombucha as is custom in Berkeley). Despite an early departure for the Card, I stuck around with Grant - another faithful Channel Tree staff writer - to cover the rest of the 'chip.

"Sam, why would you do that?" you might ask. "Why are you throwing yourself in the Crockpot-of-Sin-and-Decay that is Las Vegas to marinate among new, exciting variants of COVID!?"

Well because my apartment is small. And because this hyper-sanitized, fanless bubble is a baffling, once-in-a-life-time experience. From the suspiciously in-tune marching band tracks thumping through the speakers to a congregation of concentric, vacant seats, the T-Mobile Arena in Las Vegas is a sight to behold. So here I am, at a sleek grey press desk perched high above the court as the Oregon State Beavs attempt to embarrass the Oregon Ducks in a second sport this school year, to give you a glimpse behind the curtain. Walk with me (and be sure to keep up).

After peeling yourself away from an outdoor terrace where the 20 or so media members chomp on the day's boxed lunch (today: tacos and churros), you'll be directed to your seat: one of many mezzanine booths in a long stretch behind one of the hoops. You go through your routine:

(2) mentally prepare yourself for the demon cloud that is Twitter,

...and finally, when you're settled and look around, you really see.

Far below your skyward nose are the players, warming up their jump shots and practicing their layups, bees in a hive, spaced out in impressive geometric patterns to maximize distance. The sidelines have been accordion stretched, bench chairs turning the corner to wrap around the court.

Gone are the courtside spectators that have become a staple of basketball. There is no Drake here to massage the random Raptors player who has the misfortune of being seated in front of him. In fact, even the first swimming-pool-sized sections of flippable stadium seats are completely covered in tight, taut tarp. The players look like they're in a shallow canyon with bubble-wrapped bumpers.

One layer up, you'll see fans. Actual fans! No more than 50 are carefully distributed across the thousands of seats. Friends and family, supposedly, but the way they cheer you'd think these are the same beer-gurgling, Barstool-Sports-binging hyenas you normally see at these things.

With so few fans in the fray, you hear every quip, every groan, every insistence that the refs go see an optometrist. My favorite on the night: "YOU MOTHER DUCKER!" An oldie but a goodie.

Above the fans, there's just you (the media) and the scoreboard dancing electric with graphics and blurbs from players, officials, and mascots. The nosebleeds are blocked from view via a curtain that descends from the ceiling, which makes the place feel much less like an empty cathedral and more like an empty church.

The clunking of people descending to their row, the last slurp of an ice filled soda, offbeat coughs, high fives--these little human sounds that in aggregate create a deafening ambience are noticeably absent. We are left with the squeak of sneakers on the gym floor, the exaggerated explosions of excitement from the bench, quick words from coaches to the court. These are so distinct, so clear and somehow intimate like soft rain.

As the game comes to a close and you win your bet in garbage time (I took the over and was saved by free throws), you shuffle down the sterile corridors designed for the media's escape. A few spaced out security guards direct you with gloved hands. Very few faces cross your path. Outside, you are now in Vegas again. You head straight for the Excalibur to your hotel room.

You think, "Wow Sam! How unique to date a basketball game one on one, fanless, in a massive stadium no less!"

You joke, "There hasn't been a stadium this empty since... every single Chainsmokers concert!"

And despite the novelty of the thing, you flop into bed, 18 dollars richer, very much missing that feeling of being part a colonial organism, part of a crowd, part of a shared experience.