Tree is Better Than One: A Timeline of All Three Stanford Wins on 12/19 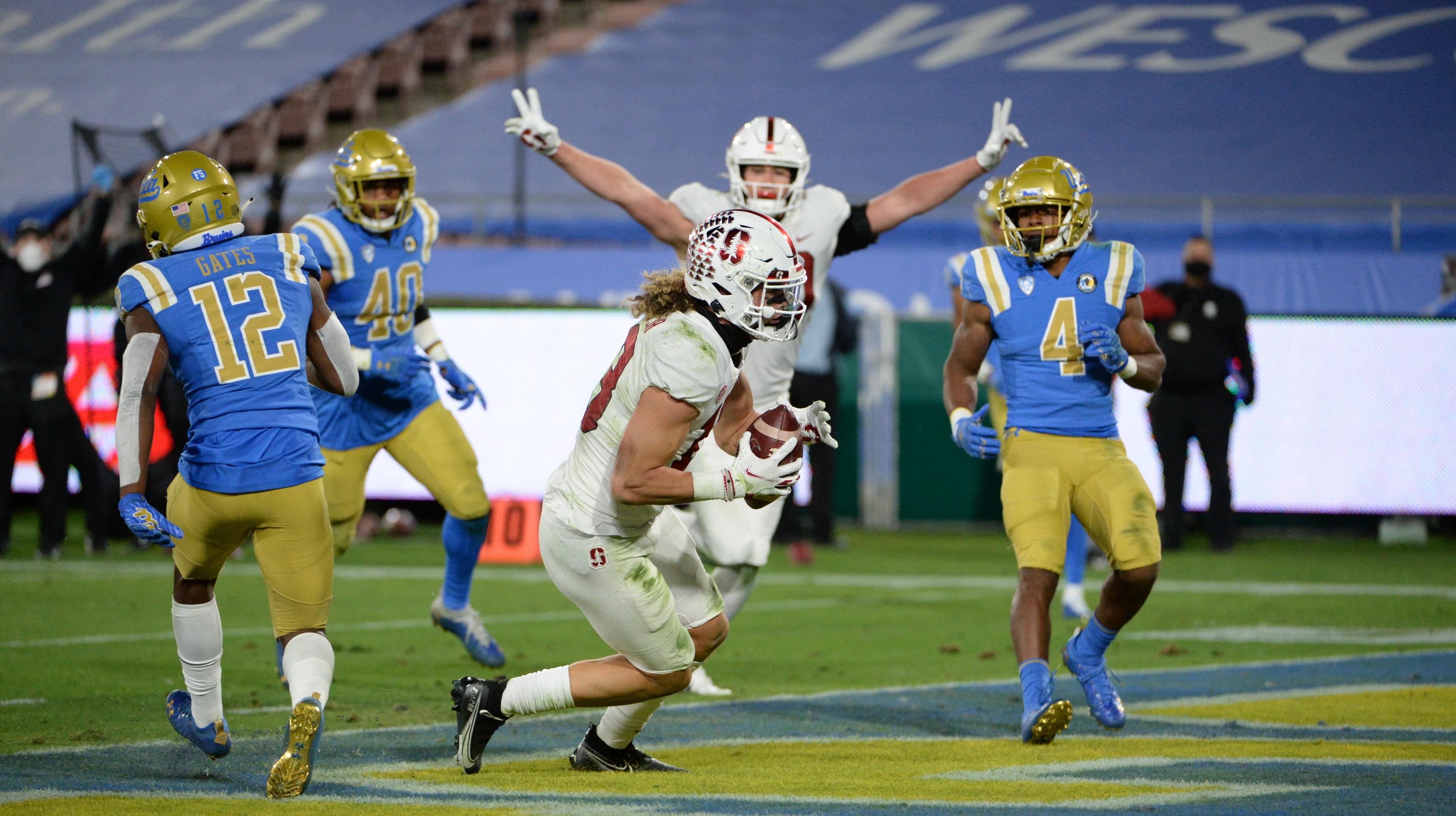 
December 19, 2020 was one of the most fun Saturdays I’ve ever had while forcibly staying at home. In an all-time scheduling failure, Stanford’s football and men’s and women’s basketball teams each had significant late afternoon games.

This was my day as a journalist and fan glued to my screens. All timestamps are approximate, but the emotions are spot on.

(9:00 AM) I use my computer, tv, and two phones to turn on my first sporting events of the day as I pore over the game notes for the Stanford games

(2:39 PM) I arrive at the Chick-Fil-A drive thru to pick up my pre-game feast before the cavalcade begins

(3:21) I finally get to the front of the drive thru line. Everyone evidently wants those peppermint shakes that they advertise six times each college football game

(4:06) Jet Toner kicks the ball off as I relegate the football game to my computer screen. I want to see this basketball streak end in 43 inches of pixels.

(4:09) Oscar da Silva posterizes Dalen Terry in what might be the dunk of the year in the conference. I scare the living daylights out of my cat, McCatfrey, who had the poor sense to nap on my lap during Stanford sports

(4:19) Austin Jones punches it in on third and goal from the one yard line on the Cardinal’s opening drive, and I start texting everyone I know reminding them that this team had the best divisional record in the North

(4:33) UCLA scores a touchdown that is wiped off the board due to penalty. They settle for a field goal

(4:47) Air Force grad transfer QB Isaiah Sanders calls his own number to take it in from 2 yards out, and gives a salute. This comes on the heels of a jaw-dropping 42 yard connection from Davis Mills to Brycen Tremayne. Jet Toner misses an extra point for the first time since his freshman year in 2003*

(4:55) Stanford basketball closes out the first half with a 30-23 lead. They dominate the period defensively, holding Arizona below 30% from the floor

(5:24) After UCLA misses a field goal, Austin Jones gets his second touchdown of the day to give the Cardinal a commanding 20-3 lead. Stanford fans everywhere start to tweet about who the real class of the Pac was this year

(5:25) Oscar da Silva picks up his third personal foul and is forced to the bench for many minutes of gametime. The Cardinal cling to a 41-39 lead with 13:50 on the clock, and for the first time I admittedly start to have doubts

(5:29) Stanford football goes to halftime up 17. A trap remix of Mr Brightside plays over the speakers at the Rose Bowl

(5:38) Daejon Davis stays down on the floor after Arizona big man Azuolas Tubelis lands on his lower leg. He has to be helped off the court. The score is 55-50 Stanford, with 9:29 to go, and his day is done. Murphy’s Law of the Stanford/Arizona series has kicked into overdrive

(5:46) Freshman Noah Taitz hits a big corner three to give the Cardinal 59-53 lead to momentarily quench the Wildcat momentum. He plays well as the main recipient of Davis’ minutes

(6:00) Arizona takes its first lead of the game as Jemarl Baker Jr’s three makes it 69-68 with under 4 to go. Stanford reclaims the advantage before any time elapses thanks to a loose ball foul on the shot. At this point I am aggressively pacing around my living room

(6:04) Spencer Jones, sidelined with foul trouble for much of the game, hits his second three in as many possessions to give Stanford a 76-72 lead with 2:03 to go. He takes a charge in between the pair of bombs

(6:05) UCLA scores on their first drive of the second half to cut the Stanford lead to 20-10. Keegan Jones runs it in from 9 yards out on a drive that sees the Bruins accumulate 0 passing yards. The 8 clap tweet is no longer feeling as funny

(6:06) Stanford and USC women’s basketball tips off in the Galen Center, and for the moment, all three Stanford teams are playing. My eyes are outnumbered

(6:13) With 6 seconds to go and Stanford clinging to a 1 point lead, Ziaire Williams steps in front of the driving James Akinjo and takes a charge. I just about injure myself celebrating. For some reason I keep forgetting to stretch before watching Stanford sports

(6:15) Davis Mills throws his first interception of the season, setting up UCLA near midfield

(6:17) Stanford men’s basketball ends their 20 game losing streak with a 78-75 win. Jerod Haase and Bryce Wills have about the happiest hug you will ever see, and the locker room celebration mirrors my reaction. I take my eyes off of football and women’s basketball to duck into the press conference

(6:23) Stanford leads USC 15-7 at the end of the first quarter as the Pac-12 network finally shifts to their game

(6:26) Davis Mills is picked off for the second consecutive possession after not throwing any interceptions in 3184 pass attempts**

(6:27) Lexie Hull hits a three from the left corner, and a foul, for the rare four point play

(6:33) UCLA takes its first lead of the game as Chase Griffin opens the fourth quarter by connecting with Chase Cota for the 23 yard score. 24-20 Bruins. UCLA fans everywhere continue to mock the 8 clap tweet

(6:59) A pick-six from Davis Mills makes it 31 straight points for the Bruins, and the deficit is 34-20 with 5:39 to go. The win probability for Stanford downticks toward 1%, and my hopes of writing this article start to slip away

(7:13) They attempt the onside kick and fail miserably. UCLA nearly returns it for a touchdown, before Jonathan McGill makes the saving play at the Stanford 27 yard line. I grumble as I question why they didn’t kick it deep with two timeouts

(7:14) Lexie Hull hits the second of two consecutive threes to blow the game open, with Stanford leading 52-34. I breathe a sigh of relief as I now feel the lead is safe and I can focus more on the last gasp of the football team

(7:15) UCLA fumbles! Stephen Herron is credited with forcing it, and Dalyn Wade-Perry comes up with the football. Without it, the Bruins would have had an opportunity at the game-sealing field goal. Only 1:38 remains on the clock

(7:18) Davis Mills sneaks the ball on fourth and one, and it is very unclear if he gets the first down. The line on the tv is wildly wrong. The refs give him the spot he needs and the chains move

(7:24) Mills hits Fehoko for their second touchdown of the quarter from 21 yards out, and Toner ties the game with 18 seconds to spare. This feels like the biggest miracle since the Oregon State game in 2017. I was watching that one while working a night shift and I spurned my Grubhub guy after the Beavs fumbled. Sometimes I still think about whether he enjoyed my milkshake

(7:32) Stanford wins the coin toss and elects to play defense. It was a first-rate toss

(7:33) UCLA strikes first in overtime, scoring on the second play from scrimmage

(7:38) Isaiah Sanders gets his second carry of the game, and turns it into his second touchdown from three yards out. Toner’s kick sends it to the second OT, but now Stanford won’t have the advantage of going second

(7:41) Stanford women’s basketball knocks off USC by a final of 80-60. Tara Vanderveer extends her record career win total to 1100 games. This game ends before the football game, despite starting two hours later

(7:42) Fehoko catches his third touchdown of the day on his school record 16th reception. Jet Toner doinks in an extra point off the upright (momentarily stopping my heart) to give Stanford a 48-41 lead in the middle of the second overtime. I am absolutely pacing again

(7:46) Gabe Reid sacks Griffin to make it third and very long for the Bruins offense, and my pace is more of a bounce

(7:48) UCLA turns 4th and 18 into a Griffin to Kyle Phillips touchdown and by this point my cat thinks I am a crazy person. He’s not wrong

(7:50) Chip Kelly elects to go for two and the win, and the initial attempt fails. But there are offsetting penalties on the play, so they get another crack at it

(7:53) The replay booth accidentally presses the button that triggers a review. This could only happen in the Pac-12

(7:54) The Bruins attempt the conversion once again, and Brittain Brown comes up short of the goal line. Herron blew up the play and the hopes of UCLA fans. Stanford wins, finishing the year 4-2 with a win in the Rose Bowl

That’s a wrap on one of the more exciting days I’ve had as a Stanford sports fan. There are no more timestamps because I found it impossible to sleep after all that excitement.

In a year where the three programs have had to be flexible and live life on the road, they have made the Stanford community so very proud. We are lucky to have three coaches like Tara VanDerveer, David Shaw, and Jerod Haase, but also countless resilient players like Kiana Williams, Davis Mills, Bryce Wills, Simi Fehoko, Cameron Brink, and Oscar da Silva.

I don’t think we will ever forget the Road Dogs. As always, it’s a great day to be a tree!