We Look At The Oldest Rivalry on The West Coast 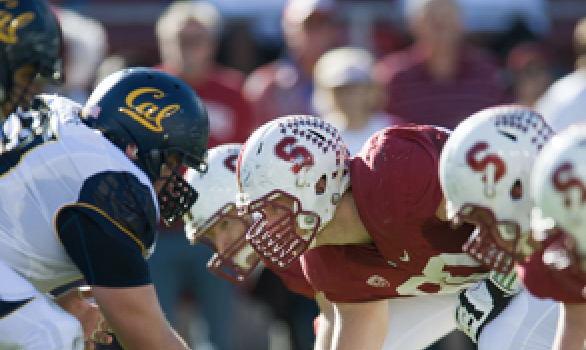 Stanford and Cal are great rivals known for having no fans and stellar academics. Despite this, the two Bay Area powers have a storied rivalry that started in 1892. It is the oldest rivalry on the West Coast. While Stanford leads the series 60-42-10 (we do not count the egregious “The Play” as a Cal victory), plenty of close finishes and surprises mean a lot of things can happen. On the eve of the 123rd Big Game, Channel Tree Sports looks at some of the most notable games in the series.

Both Cal and Stanford were undefeated at this point in the season. Stanford lost star Ernie Nevers to injuries and trailed 20-6 with less than five minutes left in the game. A furious rally saw Stanford come back and tie the game. Since Cal had ended a previous game in the season with a tie, Stanford would win the conference championship and would go on to the Rose Bowl.

Cal came into Big Game having shut out seven opponents and outscored their opponents 163-9. The Golden Bears boasted a perfect record and were on the cusp of making the Rose Bowl. They were then shut out themselves in Big Game. With both Stanford and Cal tied for the first in the conference, the tiebreaker went to Stanford. This deprived Cal of a Rose Bowl berth and gave the Cardinal one. Stanford would win the Rose Bowl 7-0 against Southern Methodist University.

This Stanford team would ultimately go winless but almost upset a No.9 Cal. They led the Golden Bears 18-14 before Cal connected on a 80-yard touchdown with less than three minutes left in the game. Stanford could not mount a last minute comeback and the Axe went to Berkeley.

An officiating error failed to notice that the player’s knee was down. Cal took the Axe on an egregious mistake.

The Cardinal scored nine points in the game’s last twelve seconds. Down two in the waning seconds of the game, Stanford Head Coach Dennis Green opted to go to two instead of the tie. Stanford did not convert the two point try but recovered the onside kick. The Cardinal marched down the field and scored a last-minute field goal to win 27-25.

The Cardinal prevailed in the first overtime of Big Game as Stanford fullback Casey Moore caught the game winning touchdown.

Stanford won the Pac-12 North with an emphatic Big Game victory. With a 63-13 final score, it was the largest margin of victory in a Big Game ever. On the Cal side, it concluded one of the worst seasons for the Golden Bears. Cal went 1-11 with a 37-30 win against FCS Portland State and no conference wins.

Three touchdowns from Montgomery gave Stanford an early 21-7 lead. He scored first on a 31-yard jet sweep. Quarterback Kevin Hogan threw a 50-yard pass down to Montgomery three minutes later. After a seven-play drive, the Cardinal scored again on a 12-yard touchdown pass.

In the second quarter, Hogan connected with Montgomery for a 72-yard touchdown pass to pull the Cardinal away at 28-10. Another strike to wide receiver Michael Rector and then Montgomery again resulted in a 42-13 score at halftime. By then, the game was over and the Stanford back ups were in.

An injury-plagued season saw the Cardinal a former shell of themselves. Cal took advantage and took the Axe after nearly a decade. They saw fit to rush the field on a 4-win team.