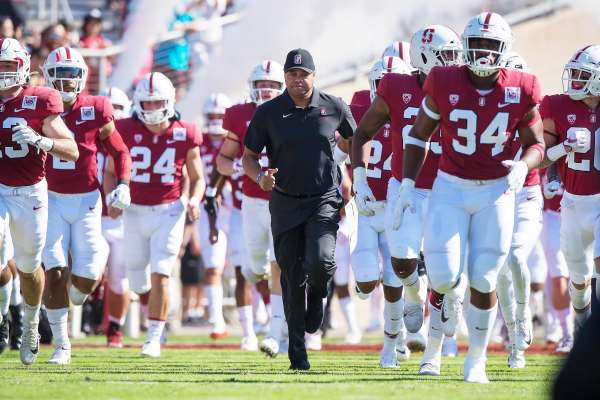 
In a press release today, Stanford announced that Football players are now cleared to return to campus for training.

Alas, nobody in their picture is social distancing... then again same with ours. The announcement comes on the heels of a broader invitation for student athletes to return to campus made on June 18th, which provided a plan detailing all of the new custom COVID-19 protocols and restrictions necessary for admittance onto the Athletics Campus. As a refresher: daily digital screenings, standard mask / disinfecting requirements, and appointment-only access to indoor facilities.

Today's announcement offers only a few more valuable data points. For one, we now know that 53 individuals have requested and been approved to begin training on campus over the last two weeks. If you're rapidly Googling "how many players are on a football roster" like me, you'll discover that it's 125 for NCAA and 53 for the NFL. Is it a coincidence that exactly as many athletes as are necessary for a full football squad (by NFL standards) have been let onto campus? Maybe. The initial invitation was open to athletes of "all sports," but it wouldn't be surprising to hear that the Football team had been given some preferential treatment in approving that initial 53.

The press release also reiterates some of the NCAA legalese on preseason training limits. In the NCAA's eyes, a school's preseason beings 29 days before their first game. For Stanford, whose season starts (or is supposed to start, I should say) on September 5th against William & Mary, this would be August 7th. Any period before that is highly regulated in terms of the number of hours a team can ask of its students. From July 13th through 23rd, teams like Stanford are budgeted 8 hours of required training a week. From July 24th to August 6th, teams are budgeted 20 hours of required training a week. Thus, despite the announcement, students will likely be operating in the "voluntary individual activities" domain until July 13th, lest Stanford wants to have another John Rittman situation on hand, Stanford's former softball coach, who among other things was accused of violating NCAA practice hour quotas.

The last item to note is that Stanford stated that returning is entirely voluntary and cannot result in penalty or loss of scholarship. As is often the case for official statements of this nature, this is likely hollow and not too reassuring for the athletes. David Shaw's system is famously seniority-based--as proof I offer up KJ Costello sitting behind Keller Chryst and Ryan Burns in the 2017 season. As an athlete in the same position, I would likely deem it absolutely necessary to show up on campus and show off my work ethic to earn Shaw capital regardless of the risk posed to my health. Plus, after a decade-low 4-8 record with losses to all three California schools, some athletes will be feeling pressure to improve their draft stock, which is tough to do while home for the summer. Given these dynamics, it would be nice to know if Football ramping up as an organization also means Stanford will begin offering housing and meals to students who make the trip to the Farm. Time will tell.

The Clemson football team has famously racked up 37 confirmed cases of COVID-19. We hope Shaw can keep the boys healthier as they begin their redemption march into the 2020 season.

UPDATE: A previous version of this article mistakenly claimed that NCAA Football rosters have 53 spots. This is the number of roster spots for NFL teams. The article has been updated accordingly. Thanks to @mbrooks05 for keeping me honest!