We had A LOT to choose from... 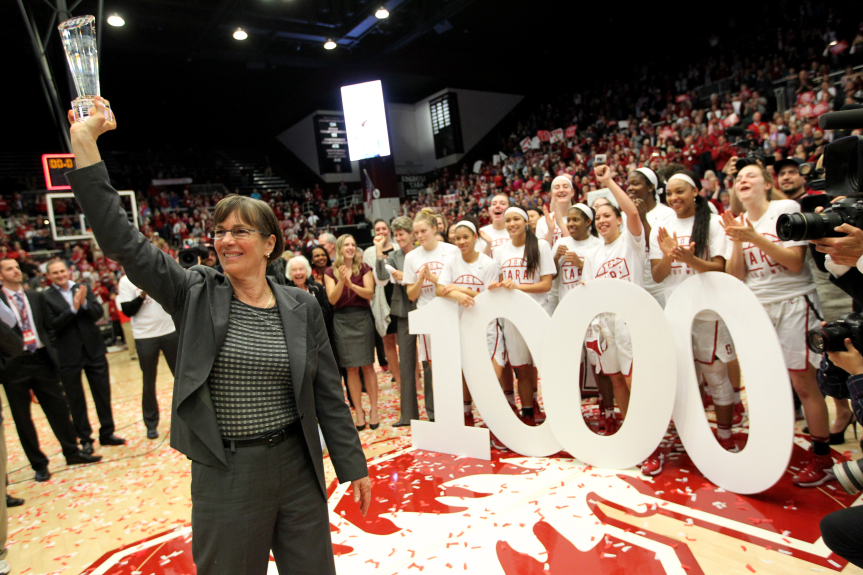 
The famed Setsuko Ishiyama Director of Women's Basketball, Tara VanDerveer, celebrated her 67th birthday yesterday, and we here at Channel Tree could think of no better way to honor her storied career than to present some of our favorite wins she's racked up over the years. Without further ado, let's dive in:

There's something special about that first win, isn't there? Armed with a master's degree in sports administration from Ohio State and myriad lessons learned while watching Bobby Knight run practices at Indiana, a 25-year-old Tara was given the keys to the Idaho Vandals women's basketball program. In their first game in December of 1978, Tara led the squad to a close win over the Northern Montana Skylights. The team would finish 17-8, a rare winning season for a program that had not seen much success in the decade. Tara would improve the following year and take her team to the AIAW tournament before moving on and up to coach at Ohio State and eventually Stanford. Cardinal fans should thank Northern Montana for taking the fall as the first domino of many toppled in Coach Tara's incredible career.

Stanford has a history of snapping UConn streaks (see #4 on our list), and Stanford's 2014 win over the Huskies is no exception. In the second game of the season, Stanford's Amber Orrange went full clutch mode, drilling a three to send the Cardinal to overtime and another three to give Stanford a one point edge with a minute left in the game. Orrange racked up 17 points and Lili Thompson added 24. Mix in some tough defense, especially at the end of the game to snuff out any competitive shots to take back the lead, and you have yourself an upset over a number one ranked team. The 2014 UConn team led by Breanna Stewart had amassed an impressive resume: 47 straight wins and two national championships. Despite the loss to Stanford, UConn would go on to win the next two National Championships, securing Stewart's place among the greatest college hoopers of all time. Stanford would earn a 4 seed in the ensuing tourney, losing to the eventual Runners-Up, Notre Dame. Still, it always feels good to knock UConn down from their pedestal. And breaking the fourth longest win streak in women's college basketball history, ain't so bad either.

Two titles in three years? Yes, please! In pursuit of their second national title as a program, the Card traveled south to Los Angeles for another set of Final Four bouts after taking home the trophy two years prior in the 1990 tourney (don't worry, we'll get there too)! Tara and Most Outstanding Player Molly Goodenbour would eventually defeat Western Kentucky and bring another championship to the Farm, but before the finals matchup, Tara won a thrilling game in the semis against the 1 seed from the East: Virginia. A close game that came down to the wire got tense when Virginia's Dawn Staley scored with 11 seconds left to make it a 1 point game. Stanford successfully wasted time on the ensuing inbound, but Virginia's Staley was able to snag the ball and dish it to a teammate while signaling for a timeout with 0.7 seconds remaining. No referee recognized the timeout, and so the buzzer sounded. As celebration ensued and players began walking off the court, Staley tracked down the refs to honor the timeout. With at least one referee able to validate the missed timeout call, the clock was reset and Virginia had one more possession to advance. Unfortunately for the Cavaliers, the shot could not be made in time, and Stanford would go on to win the championship with ease against a 4 seed. The exciting finish combined with Virginia's seeding sets this game apart as the true marker of the 1992 title game, landing it at number 5 on our list.

One decade ago, #9 Stanford played the ultimate spoiler role in snapping #1 UConn's record-breaking 90-game winning streak. The upset over UConn in December of 2010 means far more than toppling a top tanked program, which Stanford had been known to do. What makes this win so special is how intimately Stanford was woven into the fabric of UConn's monster streak: it spanned three seasons and included two national championship wins--one of which was against Stanford earlier that year in the 2010 Finals. UConn's last loss at the time? When Stanford knocked them out of the semis in the 2008 NCAA tournament. Stanford and UConn were the Yin and Yang of the late 2000s / early 2010s women's basketball landscape (much like Stanford/Oregon in the same time period for football), and both teams were playing for blood. This is why taking down Geno Auriemma and Maya Moore was oh so satisfying. Stanford won in commanding fashion that night, proving definitively that UConn was not invincible. At the final buzzer, recent grad and superstar Candice Wiggins rushed the court to join Chiney Ogwumike, Nneka Ogwumike and the rest of the team in raucous celebration. Ever humble, Tara remarked about the win, "It's not a national championship but it's a very big game for us and we're very excited."

Just as the first win earns a special significance, so does the *checks notes* 1000th. In February of 2017, Tara passed a milestone that only 7 other NCAA basketball coaches--male or female--can claim, earning her 1000th career win against none other than U$C. Take a look:

By comparison David Shaw only has 86 career wins... what an amateur. The celebration literally overflowed from Maples when the suspended-at-the-time Stanford Band broke free from house arrest to surprise Tara and the team as they exited the arena. Sharing the honor with behemoths like Tennessee's Pat Summit and Duke's Coach K, membership in the 1000 wins club represents yet another sparkle in Tara's already sterling legacy.

The second championship was sweet, but how about both Tara and Stanford's first ever National Title in the 1990 NCAA Tournament? Led by Most Outstanding Player Jennifer Azzi, Stanford took down Auburn in Knoxville, Tennessee, giving the SEC program their third loss in the title game in three years. All Right Now.

Did you forget that Tara is also a Gold Medalist? In October of 1995, Tara took a year-long sabbatical from Stanford to coach the US Women's National Team. While that sentence sounds rather ordinary today, the concept of a cohesive National Team for women's basketball was a completely new one in the mid-nineties. Sore from a bronze medal finish in the '92 Olympics, USA Basketball threw out the playbook and redesigned the Olympic program: an 11-player team was formed 10 months prior to the start of the Games, and a gauntlet of 52 domestic and international friendlies (with tournaments in China, Russia, and Australia) were scheduled to give the team a chance to build chemistry, momentum, and popularity. With Tara "hard work" VanDerveer at the helm, the US Women's National Team descended upon Atlanta with a vengeance. They finished their tour undefeated and more popular than any previous Women's Basketball team, shattering the attendance record for their sport at the Olympics. With 66 percent shooting from the field, Team USA had no problems with Brazil in the gold medal game, making Tara an Olympic gold medalist alongside two of her former students, Jennifer Azzi and Katy Steding. The culmination of an intense year of training, traveling, and kicking butt, taking home the gold for the stars and stripes is Channel Tree's favorite Tara win.

Did we miss any amazing wins? Let us know your favorites in the comments below!