The Son Doesn't Fall Far From The Stanford Tree: Father-Son Duos At Stanford

We Discuss The Impact of Father-Son Duos on Stanford Football 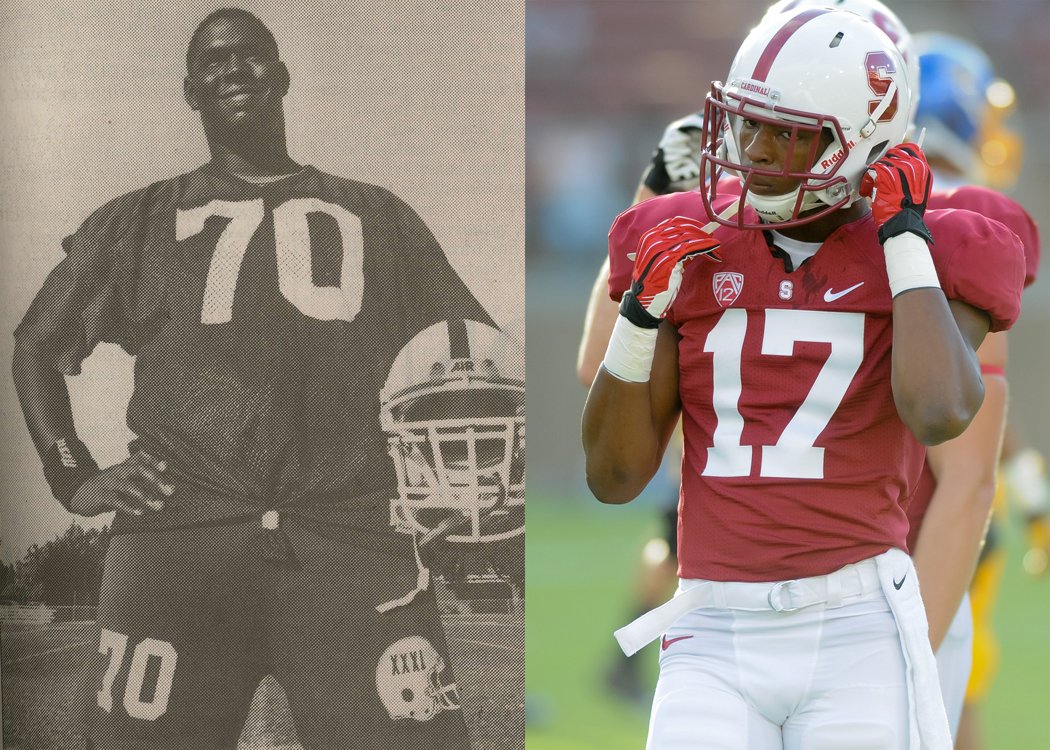 
It's Father's Day, the day where you realize your dad exists and you probably begrudgingly acknowledge it. So here at Channel Tree, we take a look at some recent and some notable father-son duos at Stanford.

Perhaps the most notable father-son coaching duo in recent memory so far. The Shaws have had a significant impact at Stanford. David Shaw has led Stanford Football to unparalleled success in recent memory. However, we must not forget his father, Willie Shaw who was an assistant coach under Jack Christiansen from 1974–1976 as outside linebacker and defensive back coach and Dennis Green from 1989–1991 as defensive coordinator. He was also a finalist for head coach as Stanford but ultimately the job went to the famed Bill Walsh. In his third year as defensive coach at Stanford, Willie Shaw led Stanford to No. 22 ranking in the AP Polls in 1991. Stanford had not cracked the AP top 25 poll since 1978 despite having legendary QB John Elway from 1979–1982.

While the Shaws have an incredible impact as coaches, the McCaffreys have made an insane impact on the field. The New York Giants drafted Ed McCaffrey in the third round but he really made his impact felt as a member of the Denver Broncos going all-Pro in 1998. The former Bronco is now the head coach of the FCS Northern Colorado Bears. The Carolina Panthers drafted Christian in the first round, eighth overall. Christian McCaffrey famously went Heisman runner-up in 2015 while breaking Barry Sander's all-purpose yards leading the Cardinal to a No. 3 ranking with a brutal route of the Iowa Hawkeyes in the Rose Bowl. The former Cardinal running back is currently the highest paid running back in the NFL with two All-Pros to his name.

Every devout football fan knows of John Elway. Sadly, we also know that John Elway's teams never went bowling or had a winning season despite also having college hall of famers WR Ken Margerum '81 and RB Darrin Nelson '82. He made his impact in the NFL winning two Super Bowls as a player and one Super Bowl as General Manager. His father, Jack Elway was the Stanford head coach from 1984-1988. The elder Elway saw some impact most notably with a 8-4 season in 1986 with a Gator Bowl loss against Clemson. His other years were not as successful with the three other seasons below 0.500.

They may be the most notable Stanford Football father-son duo currently in school. Chris Dalman came out of Salinas, CA as offensive tackle/defensive tackle but ended up a center/guard. The San Francisco 49ers drafted the elder Dalman in 1993 which he spent his entire career winning Super Bowl XXIX. Chris Dalman later returned to the farm as an offensive line coach from 2007-08. The younger Dalman currently anchors the Cardinal offensive line as a center. Also from Salinas, CA, the current Cardinal shined this past season and was recognized as part of the All-Pac 12 Second Team.

The McColls may be the most accomplished father-son duo in Stanford Football history as they are the only father-son pair to make all-American in Stanford Football history. Bill McColl became a two-time all-American at Stanford while playing end. The Chicago Bears drafted the elder McColl with 32nd overall pick in the 3rd round where he would play his entire career from 1952-59. He did this despite being a pre-med student who later studied at University of Chicago Medical School while playing in the NFL. Bill McColl later became an orthopedic surgeon. The feared Chicago Bear later ran for congressman losing by only 127 votes. His son, Duncan McColl played for Stanford as defensive end. He holds the school record for sacks in a season (17), ranks second in school history in tackles for loss in a season (26) and in a career (57), and 6th in career sacks (25). He was drafted by Washington Redskins in the 4th round. He later received a MBA from USC in 1980 and a Master of Divinity from Princeton Theological Seminary in 1995. The former Redskin DE is now an assistant pastor.

While the McColls may be the most accomplished overall in Stanford Football History, the Sandes lay claim to perhaps the most notable father-son duo in Stanford Rose Bowl history. They are the only pair to have played in a Rose Bowl for the Stanford Cardinal. John Sande III played in the 1971 Rose Bowl protecting Jim Plunkett. The elder Sande protected Jim Plunkett for 33 straight games as a three year starting center. He later went to Harvard Law School and practices in Reno, NV. The younger Sande played in the 2000 Rose Bowl rising from walk-on freshman to a scholarship player. After attending Santa Clara Law School, the former walk-on from Nevada now also practices law in Nevada.

A more recent example are the Whitfields. Winning the position as a true freshman, Bob made a significant impact as an offensive tackle who became an all-American. The OL standout was later drafted by Atlanta Falcons in 1992 and went to one Pro Bowl. He later earned his BA in Economics in 2012. His son, Kodi went to three Rose Bowls switching from wide receiver to strong safety. The former Product Design major attended grad school at Oregon and now works at Adidas as a designer.

John Lynch is famous for having taken the San Francisco 49ers to a Super Bowl and anchoring the feared Tampa Bay defense in a Hall of Fame Career. John played football and baseball at Stanford. He played his first years under Dennis Green with his final year under the famed Bill Walsh. He initially came to Stanford as a backup quarterback but later transitioned to safety shortly before junior year. He was drafted by the Florida Marlins in the second round but Walsh convinced John to continue his football career. Tampa Bay drafted him in the 3rd round whom he won Super Bowl XXXVII with. He has been inducted into both the Tampa Bay Buccaneers Ring of Honor and the Denver Broncos Ring of Fame. Jake Lynch still has his career ahead of him and has seen action as part of special teams this past year. He is an excellent student having been on the Pac-12 academic honor roll this past year which requires at least a 3.3 GPA. Jake won the Greg Piers Award given to Most Outstanding Defensive Scout Team player.