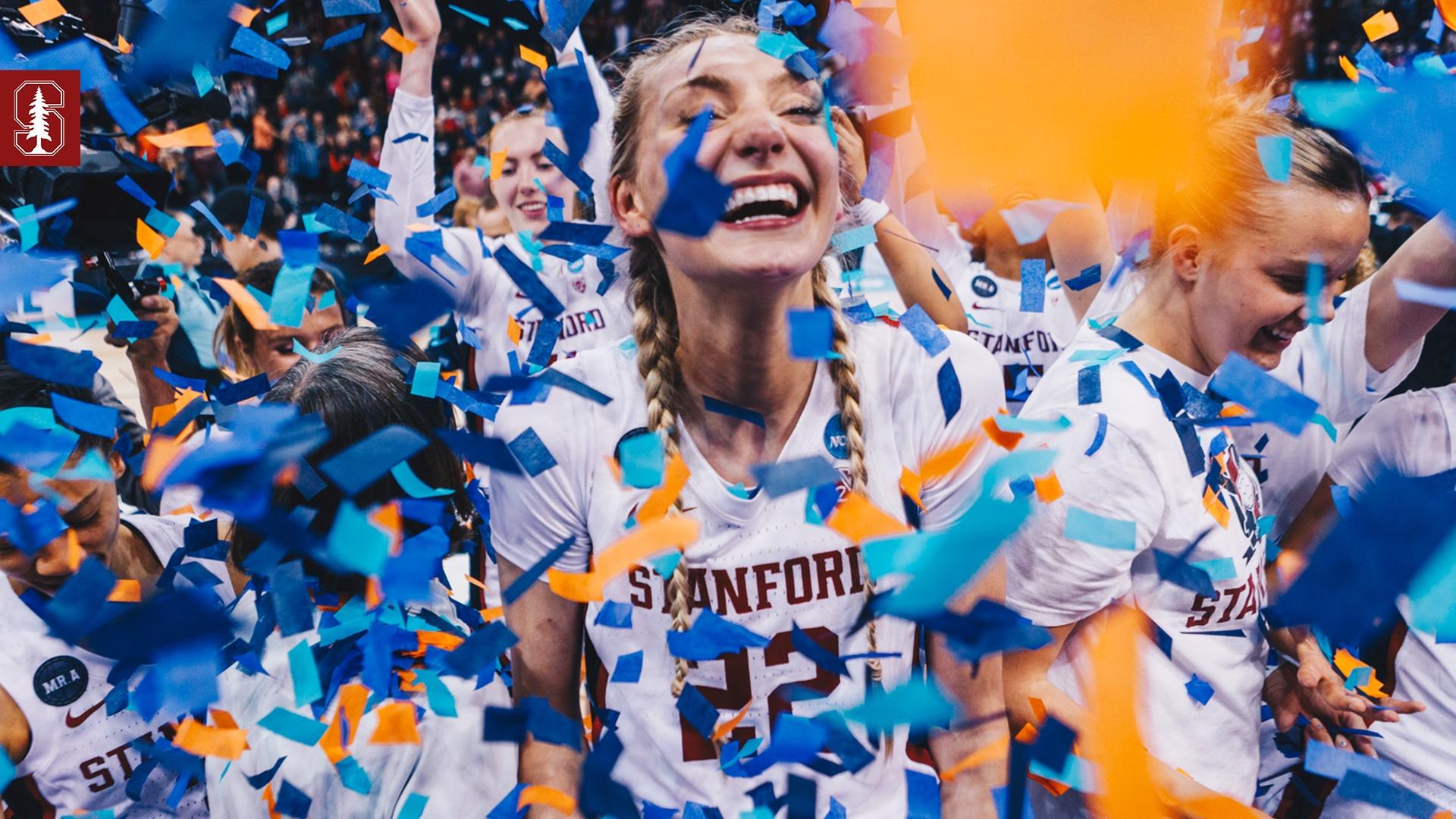 
Stanford messed with Texas... and lived to tell the tale.

On Sunday night, a back and forth battle between the Spokane region's number 1 and 2 resulted in a Stanford victory, 59-50. The win earned the Card their 15th trip to the Final Four in program history and their third in the last five postseasons (2017, 2021, & 2022, with 2020 canceled by the pandemic).

Make no mistake, Texas battled hard. When the Longhorns went on an eight point run early in the first to take a 4 point lead and the Card continued to brick threes, I saw every shade of last year's Elite Eight first half against Louisville. Were we about to collapse? Could we crawl out of another 14 point hole?

Fortunately, a 4 point advantage was the highest Texas ever flew. Stanford closed the half with a 3 point lead and narrowly edged Texas in subsequent quarters by 2 and 4 respectively.

"There's not time to be comfortable because even though you may have the lead, it can go away in an instant. So I think our team does a really good job of keeping that sense of urgency as the game goes on no matter what the score is," Haley Jones commented after the game.

Stanford's triumvirate was impressive (as always), but perhaps the real hero of Sunday's game was the zone defense. After a tightly contested first half, Tara switched to a zone and the game's momentum 180-ed. Stanford went from a team that looked like it was afraid to choke to a team confidently in control of (an admittedly modest) lead.

"Our whole team worked really hard defensively because [Texas is] tough to guard. They're very athletic, they get to the rim, and I think [we switched to zone for] a little change of pace. I'm a nervous zone coach. I hate giving up three's," Coach said of the third quarter scheme changeup.

More evidence of Tara's strategic brilliance is belied in the fact that Tara didn't whip out the zone D in Stanford's regular season loss to Texas in November. If she did intentionally risk the L and keep that trick in her bag on the off chance that she'd see Texas again in March, she deserves all the credit in the world:

Honestly, we should just go ahead and name Maples after her.

Making the Final Four is always worth a celebratory article tone, but Stanford really did struggle in their second Spokane scrimmage. They were 3-17 from the three point line. They committed 20 turnovers. They benefitted from abysmal 11 of 20 FT shooting from the Longhorns. Cameron Brink almost fouled out and Fran Belibi did foul out. If Stanford wants to win in Minneapolis, they need a cleaner game than this. The hotel called. It's wake up time.

If you're an ESPN columnist and you've made it this far, I applaud you for toughing it out through 400 words of sports content that doesn't mention UConn. Kudos! Here's a sticker ⭐️

Now you can eat your heart out.

Up next for the Card is a Final Four matchup with No. 2 seed UConn, fresh off a double OT 91-87 win at (basically) home in the Bridgeport Region over No. 1 seed NC State. UConn was led by a little known star named Paige Bueckers, who scored 27 points and went 8 for 9 in the second half and OT--a performance that begs the question... why isn't the media talking about her more?

Stanford and UConn have met in the Final Four 5 times before, with UConn taking 4 of the 5. Their overall series history is 11-7 in favor of the Huskies. Regardless the victor, Coach Tara (1,157 wins) will remain the winningest coach in NCAAW history to close the season as she currently has a 9 win edge on UConn's Geno Auriemma (1,148 wins), who resides in second place. Both coaches could pass Duke's Coach K on the men's side in the next two years. Coach K sits atop both the NCAAM and NCAAW wins leaderboard at 1,202. As he plans to retire at the close of this season, Coach K can add a max of only two wins to his total before his current Final Four campaign, and his career, come to an end.

If we lose, we'll simply chalk it up to a bad April Fool's joke. If we win, hopefully we'll be dancing like Tara was in Spokane: