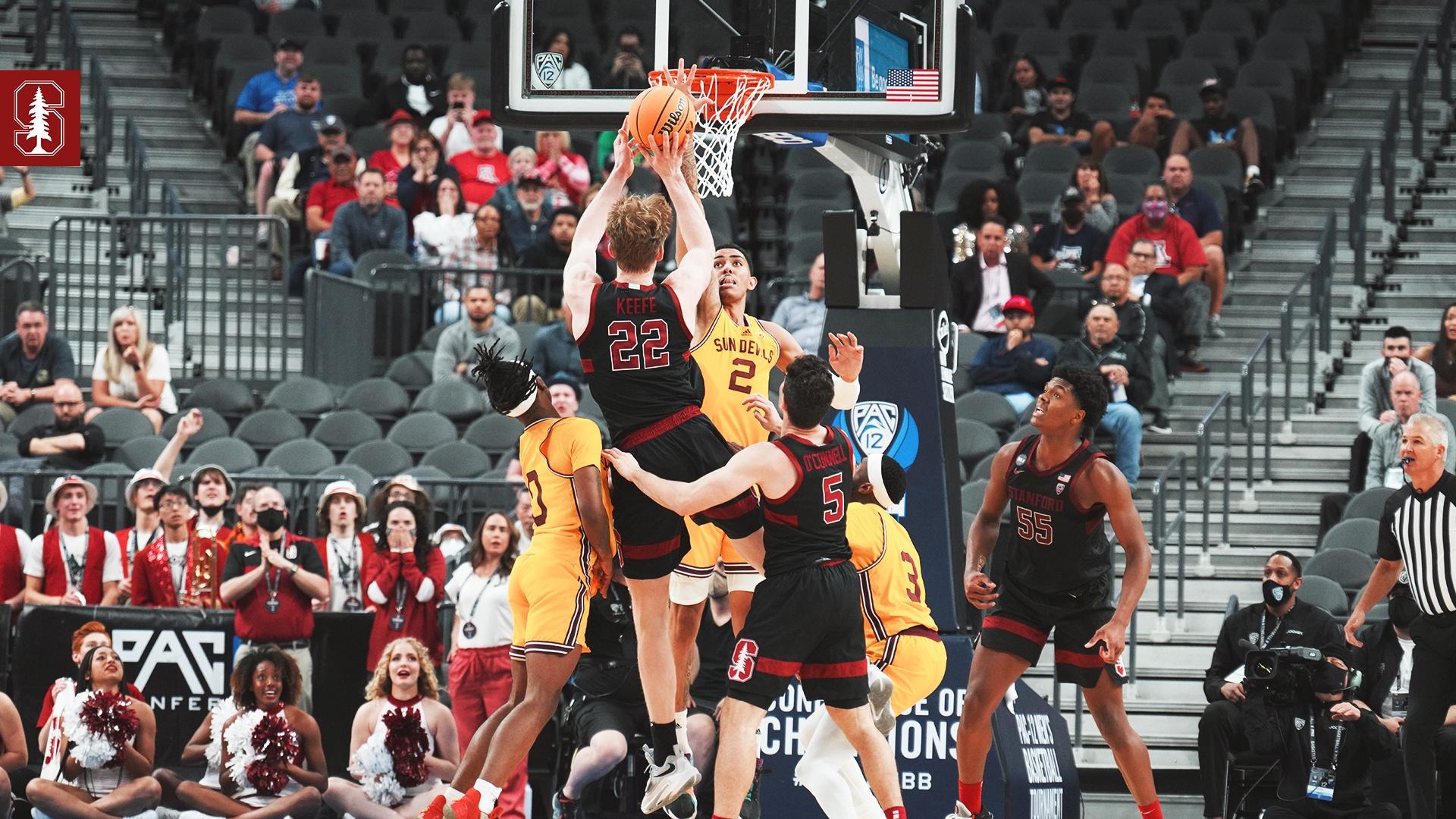 
Harrison Ingram grabbed the rebound as the clock ticked towards eight seconds. He pushed the ball up the court whilst the Arizona State defense hurriedly worked to set itself. Harrison met DJ Horne on the wing, and spun around him into the lane. Jalen Graham was waiting for him there, so he spun again to the middle. The ball was poked free, and turned into what a lot of people would call a 50-50 ball. But with James Keefe on the court, those quickly turn into 80-20 balls.

Keefe grabbed the loose change with the clock slipping under a second. He had just enough time to gather and face the hoop, aiming high off the glass from eight feet out. The ball caromed off the backboard onto the front rim, then off the glass again, before rolling around the iron and through the net. The Stanford bench mobbed James as he capped off a 16-1 run to improbably put the Cardinal into the second round.

“[James Keefe] deserved it,” said Arizona State coach Bobby Hurley. “It comes down to these little details that if you let the other guy outwork you, then you're gonna pay for it. Dude dove on the floor.”

And Stanford needed every bit of that work from James to pull off this comeback. With 3:01 on the clock, Arizona State’s Kimani Lawrence threw down an and-one poster dunk over Spencer Jones to put the Devils up 14 points. People around me were starting to talk of the Arizona derby in tomorrow’s noon slot, and I’d be lying if I said my mind didn’t go there, too. But for Stanford, there was never any doubt.

James Keefe hit the deck at halfcourt to come up with the loose ball, and called Stanford’s penultimate timeout. On the ensuing possession Stanford came up with a pair of offensive rebounds before Brandon Angel connected on a tip shot. ASU pushed the ball to a streaking DJ Horne who seemingly had a clear layup. But out of nowhere, James rose up and spiked it with two hands. He hustled to the other end and cleaned up a missed layup for an easy putback.

The Cardinal kept coming, forcing Arizona State to come up empty. The Devils did their part in missing some crucial free throws. And whenever Stanford needed a basket, they got one.

They cut it to a single point with Spencer Jones’s triple. With 37.8 seconds on the clock, they had just enough time to play out a defensive possession. Arizona State worked the clock all the way down before Second Team All-Conference forward Jalen Graham took a tough hook shot. It clanged out, setting up Keefe’s final heroics.

“The stability of our team is really phenomenal, and I think a big reason is because we have those experiences from earlier in the year,” said Haase.

Arizona State entered as arguably the hottest team in the Pac-12. After starting conference play 3-9, including a loss in Maples, they went on a 7-1 tear down the homestretch to finish at 10-10. Stanford was trending in the opposite direction. That the Devils took the lead was not in itself particularly surprising. But for the nation’s 338th best three point shooting team to tie a Pac-12 tourney record with 15 made threes? That was a sight to behold.

DJ Horne led a trio of Devils in double figures with 21 points on 5 threes. But critical for Stanford was Jalen Graham’s 2-10 shooting from the field in 23 minutes of action. He was frustrated by foul trouble and the length of Stanford. Almost every look was contested, off balance, and ten feet from the basket.

Spencer Jones led the way for Stanford with a career high 26 points, including 6 of Stanford’s 7 three point makes. He was relentless in working to get open, and his teammates did a good job of finding him for good looks. James Keefe made just about every big play, finishing with 16 points, 10 rebounds, and 2 blocked shots. Brandon Angel joined them in double figures with 15 points, 13 coming in the second half. Michael O’Connell had 7 assists against zero turnovers.

There were a lot of numbers to like for Stanford. They finished with a 32-16 advantage in the paint, a +10 edge on the boards, and outscored them 13-5 on second chance opportunities. They assisted 18 of their 26 made field goals, and committed only 10 turnovers. And perhaps most importantly, they went 12-14 at the line while Arizona State went just 3-7, including multiple missed front ends.

For James, that was his first game winner since he was playing in high school junior varsity.

“I just turned around and shot the ball at the glass like I've done a million times, eight, ten feet right there,” he said.