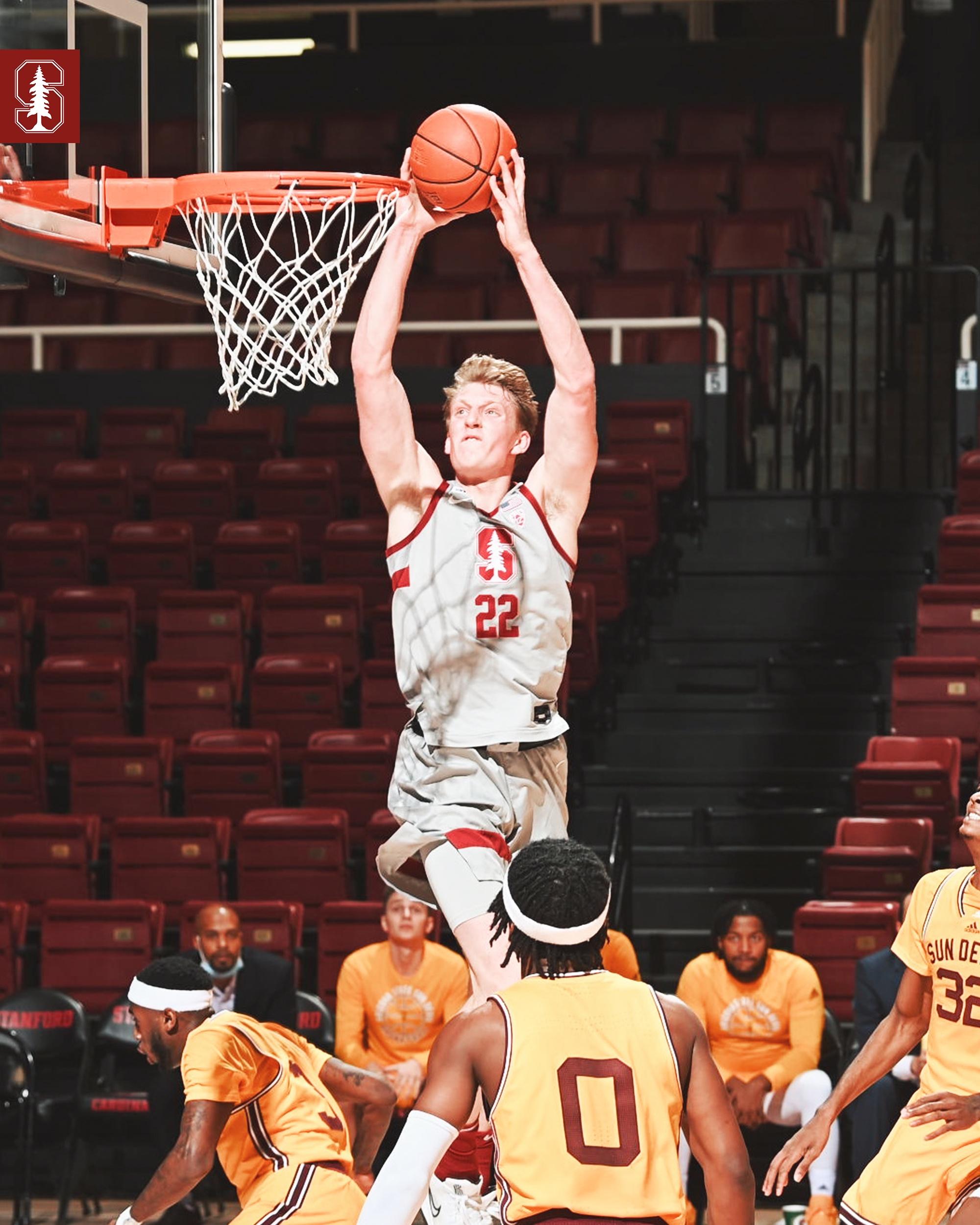 
On a night of momentum swings and flaring tempers, Stanford (11-6, 4-3) kept their cool and prevailed with a home conference victory.

With 8 seconds on the clock, Arizona State’s Jalen Graham evened the score on a tough jumper in the paint. Stanford elected to push the ball and found Brandon Angel in the corner behind the arc. As the clock hit one second he rose up to shoot and was hacked by Graham. He earned three free throws.

“That just goes back to all the reps you take in the gym after practice,” Brandon said. “That confidence that you’ve shot that 100,000 times in your life.”

He calmly sank all three of them, and a Sun Devil heave fell harmlessly to the hardwood as the horn sounded. ASU coach Bobby Hurley proceeded to berate referee Chris Rastatter and one of their players made physical contact with him. It was the culmination of a lot of emotions, and the perceived slight of a 41-9 Stanford advantage in free throw attempts.

“Throughout the season we’ve always had confidence in ourselves that any moment in the game, if we’re up or down, we’ll always prevail,” said Michael O’Connell. “We just were smooth and it worked out for us.”

The Cardinal struggled early with the aggressive Arizona State defense, and trailed going into the under 8 timeout in the first half. But they made adjustments and handled the pressure much better in the final seven and a half minutes. That led to good looks and foul shots. It also meant Arizona State was forced to play offense in the half court. Stanford outscored them 20-8 in that stretch to take a 42-32 advantage into the half.

After the Arizona loss on Thursday, Jerod Haase stressed that the team is at its best when they are creating shots for each other. From my spot in the media section, I could hear him barking out instructions on moving the ball, in particular “three sides!” His players dutifully reversed the ball, and it was effective. Nine of the eleven first half field goals were assisted.

“We knew we were going to have more success by making plays for a teammate,” Brandon Angel said. “That’s something that’s been stressed throughout the course of the preseason and season.”

Things continued to roll for the Cardinal out of the half as a weird sequence ensued in the opening minutes. Just thirty seconds into the period ASU head coach Bobby Hurley picked up a technical foul. It was an empty gym and sound traveled well, so believe me when I tell you he got his money’s worth. Two minutes later point guard DJ Horne picked up his third personal foul, one he particularly didn’t like. He let the officials know that and earned a technical foul, good for his fourth personal.

While Jerod Haase continued to coach, Hurley turned the color of the ASU mascot as he focused on the officials. The high water mark for Stanford came when Isa Silva got a steal and fast break layup to go up 15 points with 15 to go. At that point it seemed the wheels were coming off for the Sun Devils. But they didn’t go down easy.

The Cardinal turned the ball over six times in a four minute stretch, allowing Arizona State to claw their way back into the game in semi-transition. They rattled off a quick 11-0 run to cut it to four points. Even when Stanford responded, they kept coming.

Michael O’Connell earned a much needed rest as he appeared a bit gimpy. But that was short lived as Isa struggled to run the offense. Although not 100%, the sophomore came back in and gutted it out.

“He’d never tell anybody, and tries not to show it out there,” Haase said of his banged up point guard. “He gives some stability out there. He’s a warrior.”

Arizona State found something late in Jalen Graham, repeatedly going to the athletic forward in the paint. Stanford tried a number of defenders on him, but struggled to slow him down. His hookshot with 5:18 to go gave ASU their first lead in more than 20 minutes of game action. A three on their next possession gave them a four point advantage with 4:46 to go. Still, the Cardinal didn’t blink.

Brandon immediately responded with a gut-check three pointer. The game see-sawed back and forth as the teams matched blow for blow. James Keefe earned six foul shots in the final minutes and, despite entering as a sub 50% free throw shooter, calmly knocked all of them down.

“That was really impactful, and I’m proud of [James] because of how much work he’s put into it since he’s been here,” Haase said.

With a two point lead, 25 seconds on the game clock, and 7 on the shot clock, Haase drew up the perfect play. The Cardinal ran action to get Harrison Ingram a quick post touch on a smaller defender and the crafty freshman forced a foul. He missed both shots, though, setting up Graham’s tying shot and Angel’s winning free throws. After the game Harrison came back out of the locker room and shot free throws for twenty minutes. He’ll be ready next time, there’s no doubt about that.

Stanford was led by 16 apiece from roommates Michael O’Connell and Brandon Angel. They combined to go 5-9 from three and 11-11 from the line. They also provided stability when the team needed it the most. Harrison Ingram had 13 points, 10 rebounds (6 offensive), and 3 assists. James Keefe chipped in 10.

The Cardinal went 32-41 at the foul line, while the Sun Devils went 7-9. Angry Arizona State moms kept us well apprised of those numbers. It should be noted that Stanford’s offense made all five defenders work, while ASU’s was more isolation heavy. On the season Stanford is 32nd in the country in free throw rate, while ASU is 340th. The magnitude is shocking, but the numbers projected a significant Stanford advantage at the line.