Another classic entry in this destructive series 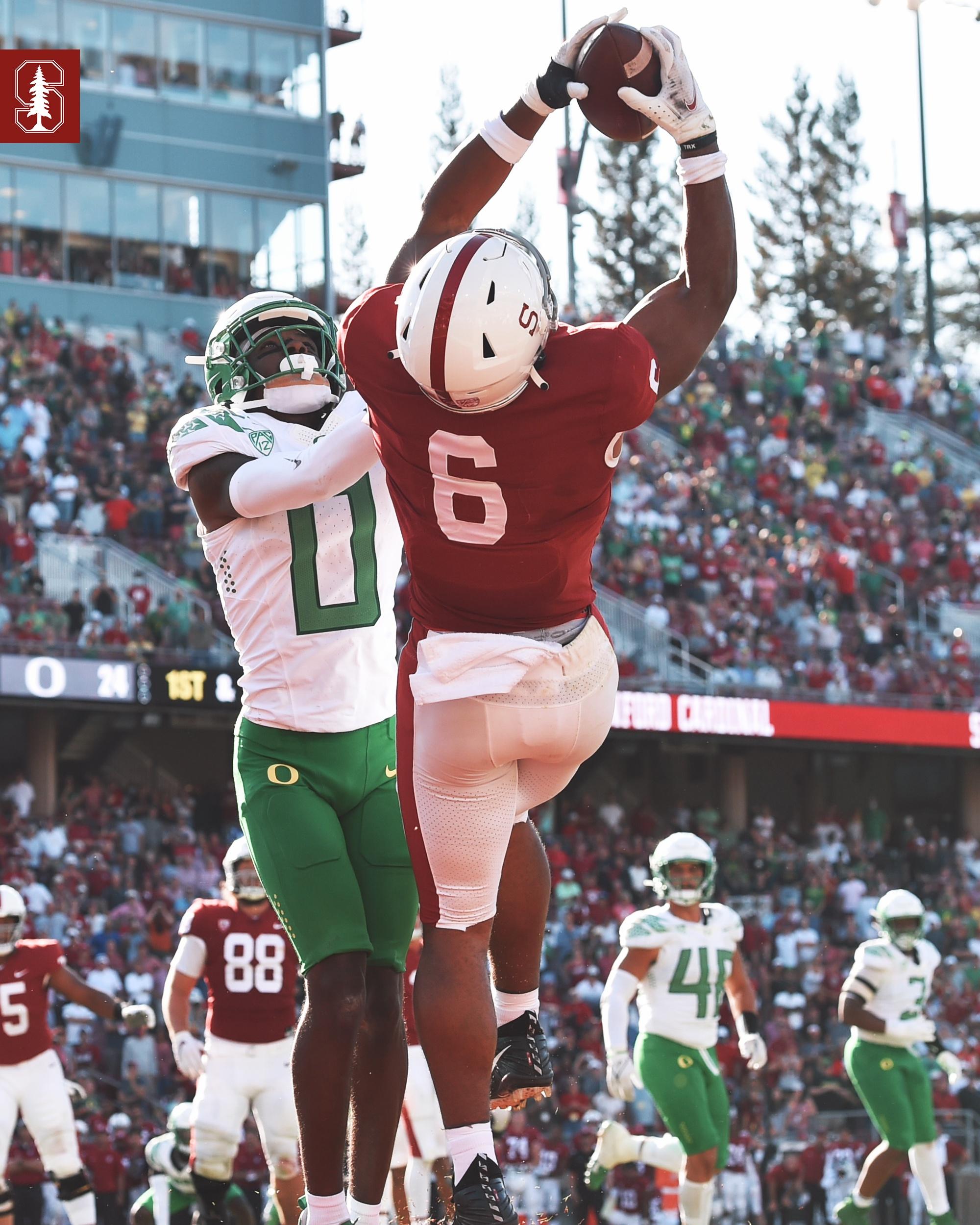 
Junior wideout Elijah Higgins said the team believes the game is not over until the clock reads 0:00. But after today, he knows better than anyone that sometimes it takes a bit more than that.

“I thought it was a flag,” said the sophomore quarterback. “But sometimes what I think and the refs think could be a little different.”

This time they were in agreement. The officials whistled Oregon standout Mykael Wright for a holding, and with no time left on the clock, the Cardinal were awarded one final chance at the end zone. After the throws to the right side fell to the turf, McKee decided to tempt the other boundary.

“You've seen Elijah Higgins; he's a mismatch for pretty much anybody,” McKee said. “So when I knew it was a one-on-one match-up, that was the guy we were going to.”

It was a good ball, but there was no clear separation. Elijah had to go up to make up a play, and he came up with the play of his life. He high pointed the ball, extending every bit of his 6’3” frame to snatch the football from the heavens. One Joshua Karty extra point later and the game was in overtime.

With the clock still off in the extra period, McKee found Humphreys on a third and eleven. The big receiver did the rest, bowling through three defenders for the score. Four harmless Oregon plays later and the fans were storming the field.

Stanford was never supposed to be in that position. This is a team picked to win four games by the nerds in Las Vegas. A squad with a new starting quarterback, a battered receiving corps, and some seriously thin position groups. Enter Oregon, a group riding the high of a #3 ranking and the accolades that come with a win in the Horseshoe that people on the East Coast actually tuned in to watch.

If you believe ESPN win probabilities, Stanford’s odds dipped as low as 0.1% on the final drive of regulation. A pair of false starts left them with second and 19 on their own four yard line with about 100 seconds remaining. Then one play after hitting Humphreys for 23, McKee was the beneficiary of a massive shot from Oregon standout Kayvon Thibodeaux. He lay limp on the turf for what seemed like an eternity.

While the medical staff tended to Tanner, the replay officials determined the play was worthy of targeting. McKee sat out a play while the staff examined his ribs, with Jack West tiding the gap. Immediately after re-entering, Tanner hit a pair of 13 yard strikes to tight ends Ben Yurosek and Bradley Archer. A handful of plays later and the stage was set for Higgins’s heroics.

"I apologize to my parents, and everybody over the age of 70," joked Shaw. "So sorry for you all."

Tanner McKee and the offense came out with a rip roaring start this afternoon. They took the opening kickoff deep into Oregon territory, before a questionable whistle and a controversial false start forced them to settle for a field goal. Two drives later, on the heels of an interception from fifth year linebacker Gabe Reid, Tanner found Brycen Tremayne in the end zone to make it 10-0. Immediately the country took notice.

You see, the college football world held Oregon up as the Pac-12’s Great Hope. The team that could end the playoff drought. But anyone who has followed this conference through the years knows that the annual Great Hope is merely a setup for the Great Upset. Especially in this series.

Oregon finally found which way was up after they simplified things for quarterback Anthony Brown. The transfer was erratic throwing down the field, but featured as a dynamic playmaker with his legs. He kept the ball around left end on a second and goal to cut the deficit to 3. But the Cardinal responded.

With the ball on the Oregon 43 yard line, McKee hit Tremayne up the seam for 15 yards where he was obliterated by a pair of Duck defenders. It was immediately apparent that something was wrong. Omitting the gory details, it was visibly clear that he will not be playing any more football this season. It took several minutes for them to cart him off, but not before the entire Stanford sideline went onto the field to see him off.

“He was on his way to being one of the best receivers in America,” David Shaw said. “If he comes back next year, I would anticipate him being on that path again.” That remains to be seen.

It was an emotional moment, and everyone in the stadium would have understood if they had folded on that drive. The offense had no such plans. Eight runs later, quarterback Isaiah Sanders checked into the game and called his own name to punch it in from two yards out.

Oregon threatened at the end of the half, taking the ball to the Stanford 1 yard line for a fourth down opportunity.

“Everyone did their assignment, we got a surge from the D-line, and everyone fit their gaps right,” Gabe Reid said. He and fellow linebacker Jordan Fox met the quarterback in the backfield and dropped him to preserve the 10 point lead into the break.

The Stanford offense went dormant in the second half. Mario Cristobal dialed up more running plays for the Ducks, and they had some sustained success. After taking their first lead in the fourth quarter, they had a chance to run out the clock, with a first down from the Stanford 39. Ten more yards would have just about iced the game. But a pair of penalties and a human wrecking ball named Thomas Booker forced a punt, setting up the dramatic final drive.

Today’s game featured throwback jerseys to the 1971 Heisman season of Jim Plunkett. It also featured brief ceremonies honoring the many recent national champions and olympians from The Farm. This opus was the perfect way to tribute them all.