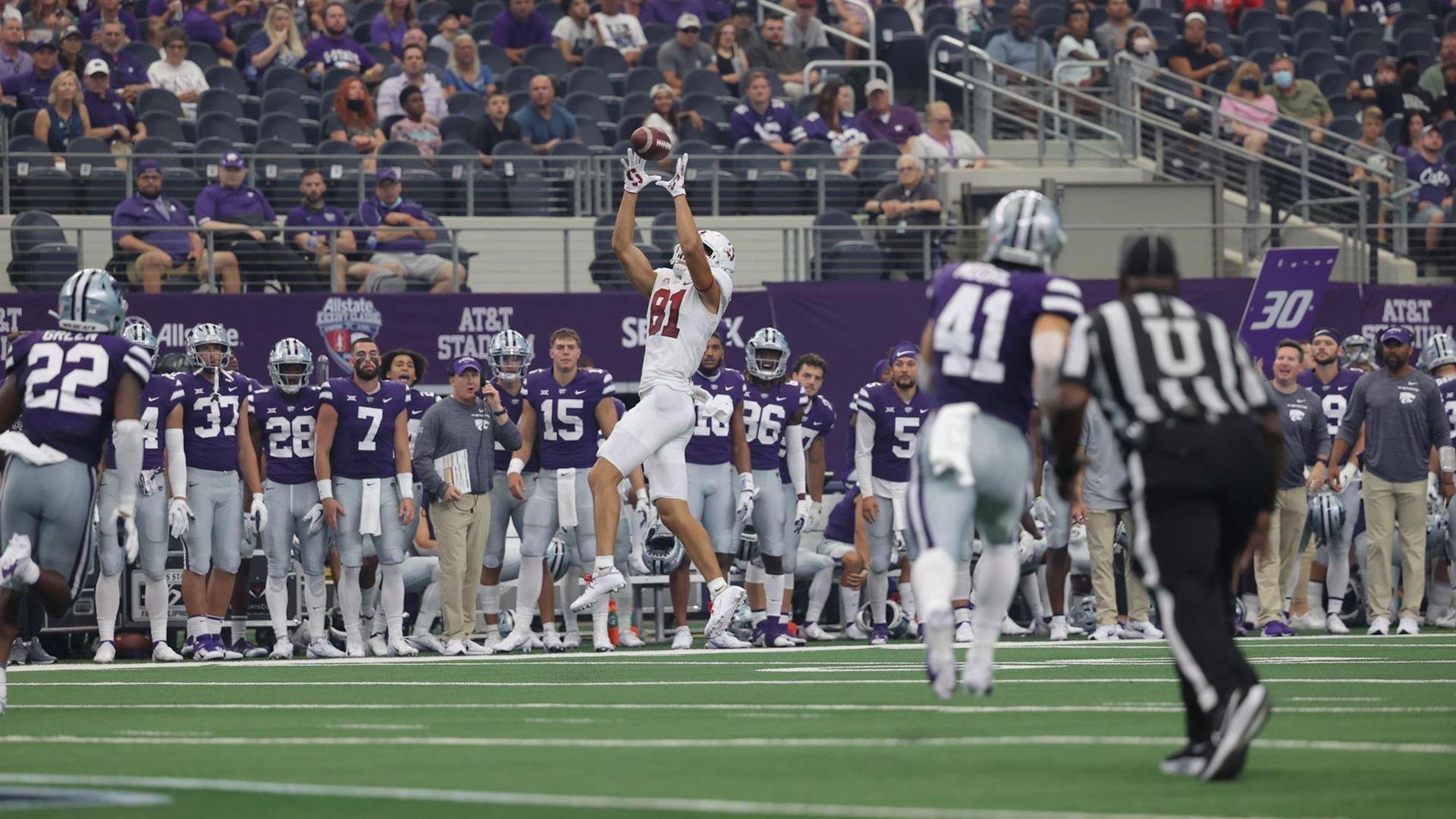 
Think back to an early September morning on a beautiful Saturday. Football is finally here. An air of optimism pierces the lungs of college football fans around the globe.

Now, think back harder and remember Stanford football losing to a team full of purple cats. The offense was flaccid and the defense had to do enough to keep from imploding completely, like a kid who was told their drawing did indeed suck.

Since it only happened this past Saturday.

The Cardinal (0-1) lose their first game of the season to Kansas State (1-0) 7-24 in the AllState Kickoff Classic in Cowboys Stadium.

Much like that tragic day in Evanston, the Stanford offense failed to generate any traction against the purple felines.

The Cardinal scored one touchdown on a terrific 14 yard pass from sophomore quarterback Tanner McKee to senior wide receiver Brycen Tremayne in the waning moments of the game, when the outcome had already been decided.

Stanford could not get the running game going with junior running back Austin Jones rushing for 25 yards on nine carries.

“On the offensive side, couldn't establish anything running-wise,” Coach Shaw said. “We had a couple of nice creases. But once we got down, we tried to mix in the run but we were inefficient. Very inefficient. And then we had to throw the ball.”

The “we” who threw the ball were actually two quarterbacks as senior Jack West and McKee took turns as signal-callers.

West started the game and went 8-12 for 76 passing yards and two interceptions in different spurts throughout the game.

McKee had the aforementioned touchdown but added 15-18 for 118 passing yards.

While both quarterbacks had their ups-and-downs, McKee seemed to hit higher level throws on multiple occasions. But Coach Shaw felt they both could have done better.

A two-quarterback system could breed confusion on offense, but the team didn’t believe it was an important factor for the poor offense.

“I don't think so,” Tremayne said when asked if the quarterback situation was a challenge. “I think it was just our execution on both sides with penalties and just us not executing to our best ability. Because I know we can make plays with both quarterbacks.”

The Cardinal had four drives into Kansas State territory and three of those drives ended due to penalties and sacks.

The offensive line let the Wildcats sack the quarterback four times including on a third down to end a drive in the third quarter. Additionally, the line could not open holes for the running backs to break into the second level.

Stanford rushed for 39 yards in total while the Wildcats put up 200 yards on their end.

“Some of the sloppy play with our hands were difficult,” Coach Shaw said of his offensive line. “When we did our jobs up front, we got some nice lanes to run the ball. But once we got down, it became very difficult.”

On the other side, the defense had to recalibrate after senior linebacker Jacob Mangum-Farrar was a late scratch.

In its first drive, the defense let the Wildcats drive down the field with ease to the Stanford-23, but it was let off the hook when junior cornerback Kyu Blu Kelly picked off Wildcats quarterback Skylar Thompson on an impressive play in the end zone.

The interception seemed to be an aberration as on the very next defensive series, the Cardinal let Kansas State score a touchdown-- one play after allowing a 56-yard pass from Thompson to wide receiver Phillip Brooks.

Then, one series later, the Cardinal allowed Wildcats running back Deuce Vaughn to score the longest (59 yards) rushing touchdown in the history of the Allstate Kickoff Classic.

After halftime, the Stanford defense played better by not allowing a touchdown until the fourth quarter after West threw an interception to set up the Wildcats deep in Stanford territory.

“I think the first one or two drives...that was a lot of our guys’ first [drives],” senior linebacker Ricky Miezan said. “So nerves were high. And then ... we kind of settled in and just calmed down.”

The defense was able to settle down, but it still allowed the Wildcats to run deep at the second level. Vaughn and Thompson used their legs to set an Allstate Kickoff Classic record with 6.5 yards per rush.

“We gave [Kansas State] a lane,” Coach Shaw. “The lane -- runs turn into big plays. When it came to the quarterback, quarterback (Skylar Thompson) used his legs to scramble and make a big play down the field. And later in the game, make a big play with his legs. Played pretty well on the defensive side outside of, but that's what it takes. Giving up way too many big plays, too many explosive plays.”

The Cardinal will need to work on the problems on both offense and defense quickly with a difficult schedule and a harder challenge next week as they travel to Los Angeles to play (1-0) No. 15 USC.

It’s easy to be negative about this Stanford team, but think about the Cardinal’s winning streak last season.

And if you think back farther to the 2015 season after Stanford failed to beat a purple cat team in the first game of the season, it ended pretty well on the back of the Cardinal’s grit.

Or as Miezan puts it: