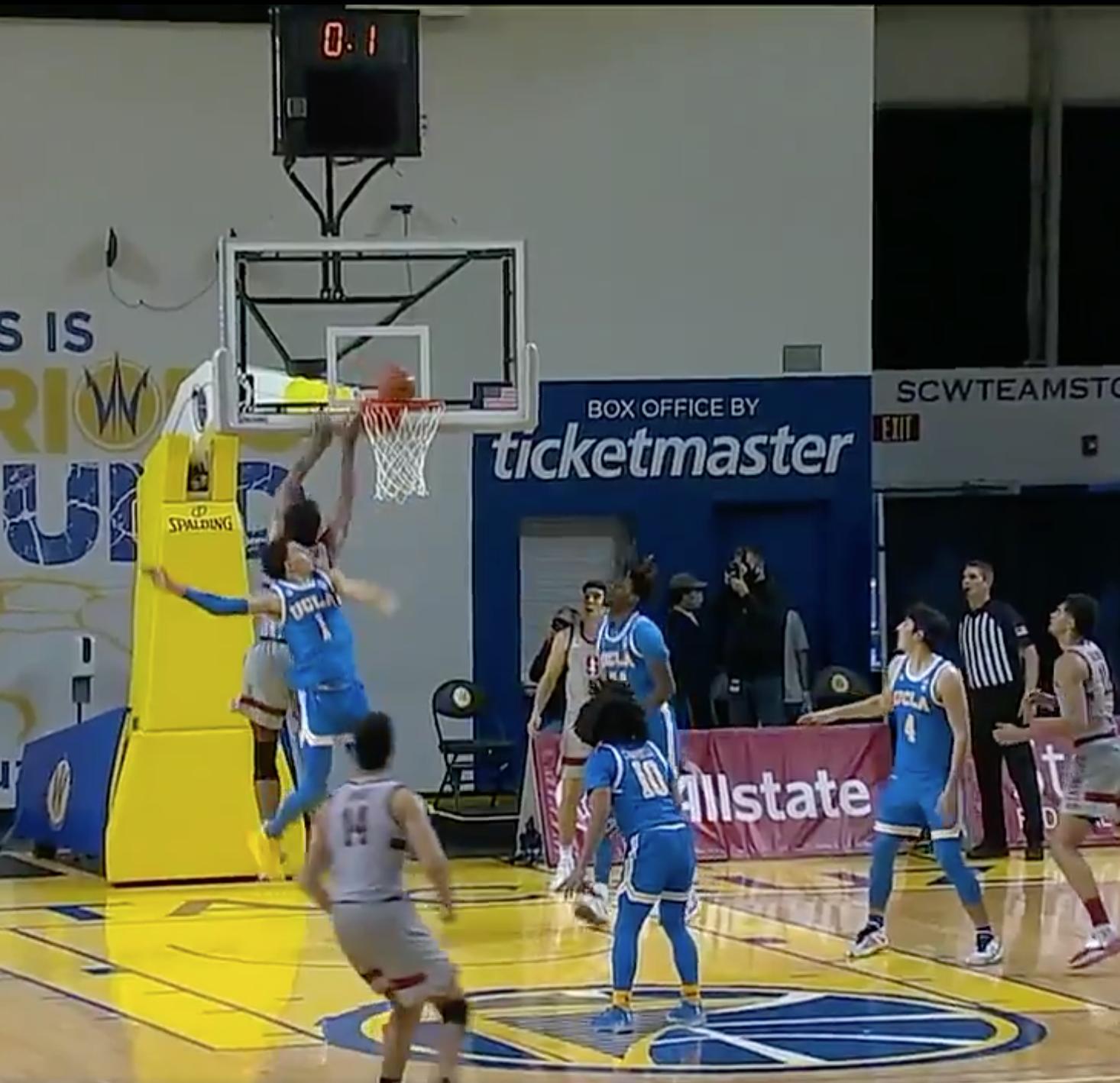 
Trailing 72-71 with 0.8 seconds remaining in an overtime period, head coach Jerod Haase knew exactly what play to call. After Thursday's game with USC was postponed, the Cardinal held an impromptu practice focusing on special situations, including a certain baseline out of bounds play.

"I told the guys you better know these things, I may not have a timeout," Haase said. Freshman point guard Michael O'Connell took the ball from the official, and Jaiden Delaire looped his way around a Lukas Kisunas and Oscar da Silva pick at the strong side elbow. As the referee's left arm counted the seconds, it was time for the secondary action.

"I was supposed to get the lob," said da Silva. "But they were aware of that and started yelling 'watch the lob, watch the lob.'" The senior captain thought about flaring out to the three point line, when UCLA guard Tyger Campbell took one step that direction, and it was all Oscar needed. "That space under the basket opened up, and I just went and tried to lay it up as quickly as I could."

"In practice I would’ve given them a C-," said Haase. "But they proved again they’re Stanford kids, and they know it and they learn it."

But for all the focus on the stunning final shot, Stanford was never supposed to be in position to call that play in that situation. At least, not today. Captains Bryce Wills and Daejon Davis remain sidelined with injuries, and freshman phenom Ziaire Williams is not with the team as he attends to a personal issue. Together those three players combine for 35 points per game, much of the team's ball handling, and elite perimeter defense. Player availability issues contributed strongly to last week's two game skid.

The Bruins entered 8-0 in Pac-12 play, off to their best start since the '80s and boasting a top ten offense nationally. Much praise was heaped on the point guard Campbell, the conference's leader in assists. He must have been licking his chops when he lined up for the tip and did not see the Cardinal's normal stoppers. It was a recipe for an easy Bruin victory. But that is why they play the games.

Stanford had two healthy scholarship guards on the roster, both freshmen. They called upon O'Connell to man the point for 41 minutes against one of the savviest guards in the land. Meanwhile Kisunas made his first start of the season after logging more than 10 minutes just twice all year, and even being a healthy scratch once.

Jerod Haase talks so much about the program's core principles: Invested, Tough, and Selfless. He pointed to Lukas as the embodiment of those tenets. "If [Lukas] doesn’t play a minute, he would’ve celebrated just as hard in the locker room," Haase said. But the big man played 33 massive minutes, unequivocally turning in his best performance of the young season. "He hasn’t been home in a long time, and he’s sacrificing a ton to be here. What he’s giving to the team is special."

The Cardinal jumped out to a surprise 11 point lead in the first half behind elite defense. They were playing cohesively, or as Haase describes it, five guys tied together. The Bruins quickly climbed back into the game behind the hot shooting of Kentucky transfer Johnny Juzang. The microwave-like player at one point had 23 of his team's 32 points, and his shot-making had the game all square at the break.

Neither team could bust the game open in the second period, though the Cardinal led by as many as 6 points. UCLA is at home in close games, and they used a pair of free throws to take a one point advantage with less than a minute remaining in regulation. Spencer Jones responded by drawing a foul on a three point attempt, and calmly drained each of his shots from the charity stripe. The Bruins tied things up and had a chance to win it at the horn, but Campbell's (push-off) step-back attempt fell off the rim.

In the extra period Stanford again took a 6 point lead, as Jaiden Delaire turned a deflection into an alley-oop finish. But sophomore Jaime Jaquez and Tyger Campbell clawed their way back into it, and Campbell finished an and-one to give the Bruins a lead with 5.5 seconds to go, before Oscar's buzzer beater righted the ship.

"The amount of pride I have in my team is off the charts," Haase said. "If we would have lost that game, it would have been equally off the charts." The coach deserves an enormous amount of credit for this victory. The missing players are all significant, but this team found a way. Despite playing forwards at the 2 for much of the game, they had a positive assist-turnover ratio. Despite playing freshmen on the Bruins' star playmaker, they gave him fits. There were any number of things that 'should have' gone wrong for the Cardinal today, but they were the better coached team. And the players met the intensity of their leader.

Per usual, Oscar da Silva led the way for Stanford. The senior had 26 points, 5 boards, and 4 assists, including 9-9 shooting from the line. "That was my first [buzzer beater]," Oscar said. "I’ve been playing basketball 14 years, and I've never made a game winner at the buzzer like that."

Jaiden Delaire continues his strong junior campaign with a line of 19-4-4. Spencer Jones turned in a clutch 13 points playing through a hip injury that sidelined him against Colorado. His game continues to mature, and his coach says he is growing into a big time offensive player. Kisunas matched his career high with 9 points to go with 7 boards, and Michael O'Connell had 5 assists against 0 turnovers.

The Bruins were led by Juzang's 27. Jaquez and Campbell had 14 and 13, respectively.

The Cardinal now sit at 5-3 in conference play, right in the thick of the standings. They will be on the road next week against the Arizona schools, which is never an easy task. But after today, do you really think this team cares about easy?