Weird week ends with a win! 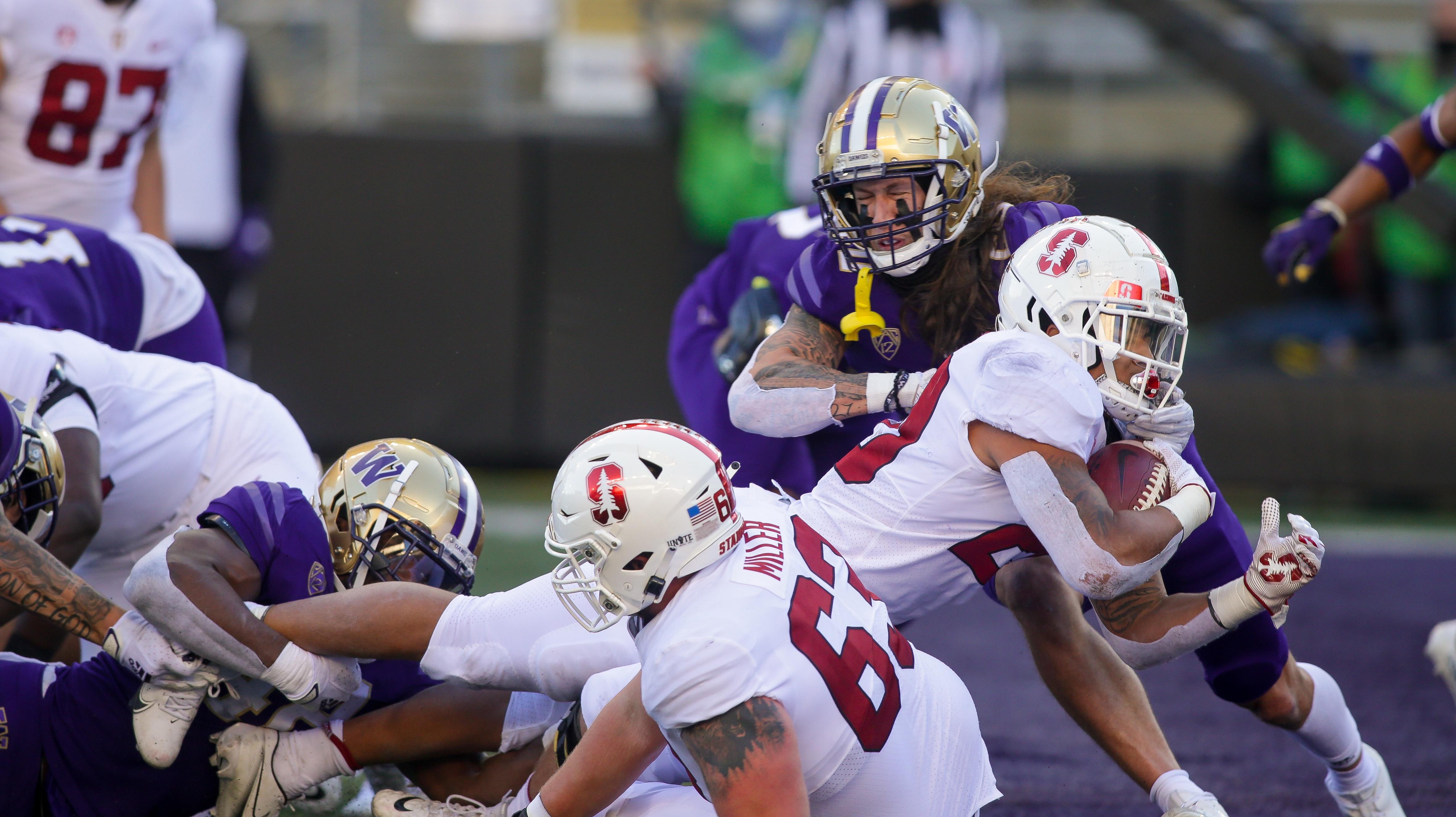 
Stanford (2-2) had a bizarre week that included becoming refugees from their own county, getting kicked out of a parking garage, and receiving jeers while practicing in a Seattle park. It culminated in a Shaw-esque 31-26 victory over 22nd ranked Washington (3-1).

“There are two types of people,” head coach David Shaw said. “People that complain, and people that act.”

With 7:47 on the clock and clinging to a five point advantage, the Cardinal received the ball at their own 12 yard line. It was time to act. They were down three veteran receivers, coming off a fumble, and what had earlier seemed like a runaway was quickly slipping away, but none of that fazed them. What happened next was vintage Stanford football.

Two straight runs with sophomore running back Austin Jones got them nowhere. Davis Mills dropped back on third and long, a down that has haunted them all season. He had to change his spot, but he got the ball out in time and found junior wideout Simi Fehoko past the sticks.

Five plays and a first down later, they again had themselves in third-and-long. Mills found Fehoko streaking down the right sideline, putting the ball where only he could make a play on it. A Washington defender interfered with the 6’4” receiver, but he was still able to make perhaps the catch of the year for the Cardinal, good for 25 enormous yards. The ball would never again leave the ground.

The final six Stanford plays saw the ball in Austin Jones’ hands. On the previous drive, he had fumbled for the first time in his Stanford career, and was visibly upset with himself. But his teammates picked him up, and helped give him the confidence to finish the game the right way.

“They were like, ‘we’ve got your back,’” Jones said. “‘Pull through for us and we’ll get you going.’” And he and his teammates each held up their ends of the bargain.

“I felt like we broke their will,” said senior offensive tackle Foster Sarell. “It feels great to get the big bodies in there and road grade dudes.”

The Husky defense had little success all day against the big Cardinal offensive line, tight ends, and fullback Houston Heimuli. But with the game on the line, they knew Stanford would run the ball. With a fourth-and-one with 38 seconds remaining, everyone knew that. As it turns out, their prescience was not good for a whole lot.

Sarell, Heimuli, and their large friends moved the Washington defenders enough for Jones to churn his way for a powerful three yards. The final seconds ticked away, and for the second straight year the Cardinal beat a ranked Husky squad.

After Santa Clara County outlawed contact sports, Stanford relocated their operations to Seattle for the week. They were able to get some time in at genuine practice facilities at Washington, but they had to get creative for the rest of it. That meant trying to practice in the parking garage of a mall, which ended with an eviction.

“We got Paul Blart-ed out of there,” Shaw said with a nearly detectable grin.

That led them across the street to a park, where passersby quickly recognized the group of generously-sized young men.

“People were taking pictures and making fun of us,” related the Washington native Sarell.

For a team that had early season practices disrupted due to the conference’s bungling of Covid tests, they were happy to practice wherever they could. And the results were stark. Davis Mills was sharp, connecting early with veteran receivers Connor Wedington and Michael Wilson before they both departed with injuries. His passes were well timed and placed; the passing game was abundantly in sync.

“He stepped up and made big time throws,” Shaw noted.

But there were not many throws needed. Like the days of yore, the Cardinal frequently lined up with extra offensive lineman Myles Hinton, as well as tight ends and a fullback. Washington had no response for that bully ball in the first half. Stanford ran their first three possessions into the end zone, and kicked a field goal before the half on their fourth. The lead was 24-3 at the break.

The Huskies scored touchdowns the first three times they had the ball in the second half. A Thomas Booker blocked extra point (sound familiar?) made the score 31-23 with 10 to go. Disaster nearly struck when Jones fumbled, and Davis Mills had to hustle back for a touchdown-saving tackle at the Stanford 10 yard line.

The defense showed their gratitude on the field. The pass rush, led by senior defensive tackle Dalyn Wade-Perry, forced a pair of holding penalties that gave Washington 3rd and goal from the 29 yard line. That field goal was the final time the hosts would touch the ball.

Austin Jones finished the game with 31 carries for 138 yards and two scores. His fellow sophomore, Nathaniel Peat, chipped in 7 totes for 44 more and a score of his own. Mills was an efficient 20-30 for 252 yards and a touchdown toss to Scooter Harrington. On the day, the Cardinal converted 10 of 13 third downs as well as both fourth down attempts.

Stanford easily played their most complete game of the year, but David Shaw says they can be better. “We’re not mature enough yet to put a good team like Washington away at their home,” Shaw said. “Guys are upset that we didn’t finish the way we wanted.”

They will get their chance to do just that in next week’s tussle with Oregon State. The game was previously scheduled for Stanford Stadium, but has since been moved to Corvallis. The team will practice there ahead of Saturday.