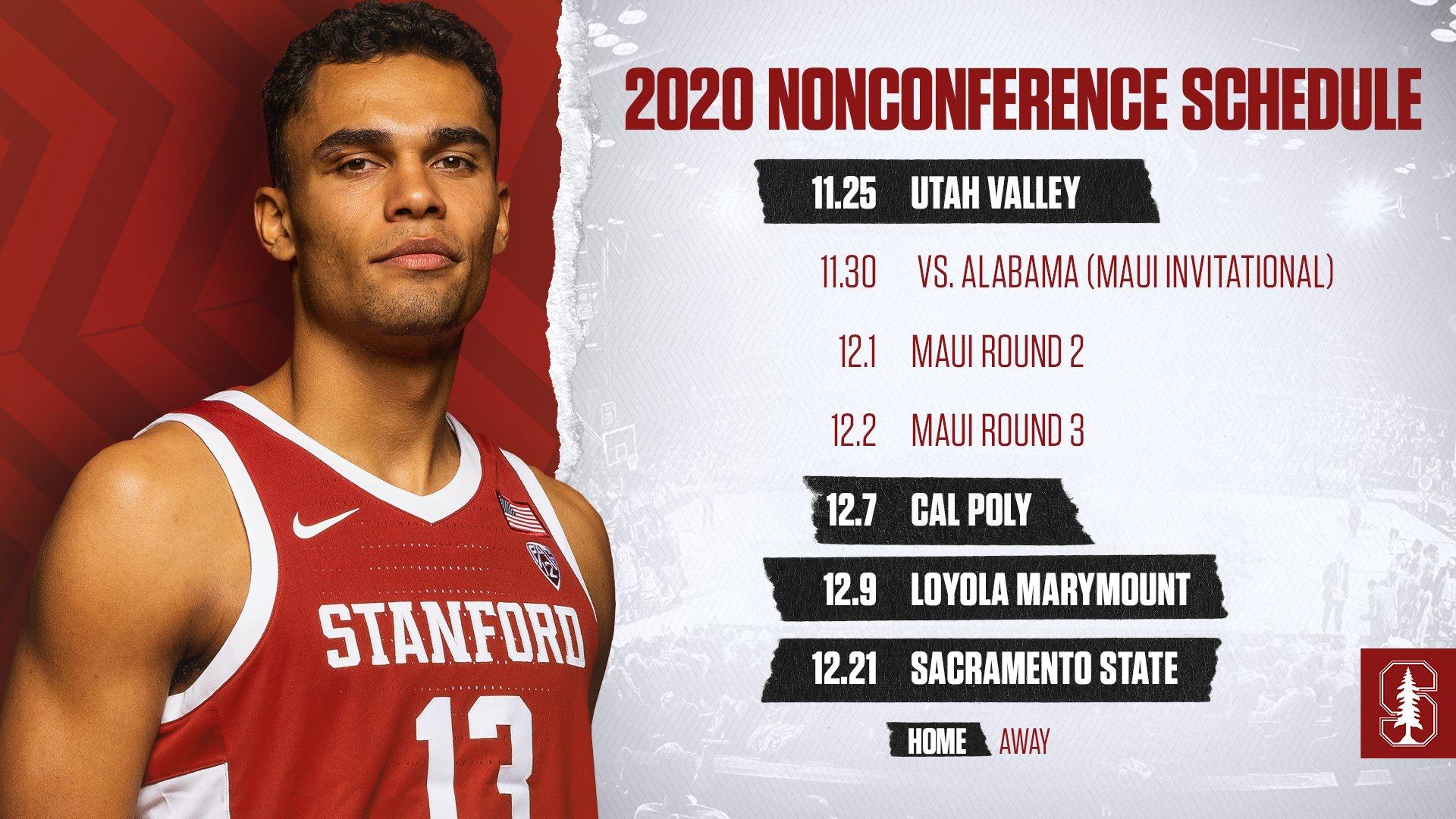 
With the season only 16 days away, Stanford Men's Basketball released their non-conference schedule.

The NCAA set the maximum number of games at 27 for teams in "multi-team events" (MTEs). The Pac-12 moved to a 20 game schedule this season, leaving only seven games of wiggle room. Originally the Cardinal had their sites set on trips to Maui and Brooklyn, but the pesky pathogens refused to permit.

In their place is the Maui Invitational, Live From Asheville, and four home contests against non-power conference foes. The Cardinal recently received only 14 votes in today's AP Poll, and I know the guys in the program are itching to prove they are better than their 33rd ranking.

Mark "Mad Dog" Madsen brings his Utah Valley Wolverines into Maples on college basketball's opening night. He is one of the bigger personalities in program history, and his go-ahead dunk against Rhode Island in the 1998 Elite Eight led the Cardinal to their lone modern Final Four. But more likely than not, this will be a spoiled homecoming. UVU is fresh off an 11-19 season that saw them finish 8th in the 9 team WAC.

Though Asheville, NC is far from the warm waters of Lahaina, there's a 50/50 chance Bill Walton still breaks out his Hawaiian shirts (if he wears a shirt at all). The Cardinal open the tournament with an underrated Alabama team. The Crimson Tide return a solid nucleus including John Petty, Jaden Shackelford, and Herb Jones, and add into the mix former Villanova guard Jahvon Quinerly.

On Day 2 they will play either UNLV or 16th ranked UNC. Haase has had troubles against his long-time mentor Roy Williams. The tournament's third day will bring a matchup with one of Texas, Davidson, Indiana, and Providence. The Longhorns are 19th in the initial poll.

Stanford can hang with any team in this field. Given the soft nature of their early schedule, winning at least two games here will mean a lot toward building a strong tournament resume. But this team undoubtedly has their sights set higher.

This game was one of the two holdovers from the pre-Covid schedule (Sac State being the other). The good news for the Mustangs is they return many of their key contributors from their 2019 campaign. The bad news is that team went 7-23 and finished dead last in the Big West. They added five freshmen and a JuCo transfer, but the Cardinal should take care of business in this one.

Outside of the MTE, this should be the game to watch. Yes, the Lions went 11-21 a season ago, but they will be far better than that record foretells. Three of their top players from a 22 win 2018 team spent the entirety of last year on the pine, and appear primed to return to big roles. That trio includes the 7'3" Swede Mattias Markusson, who drew interest in the transfer portal before opting to return to Los Angeles.

Last year's leading scorer and former LaVar Ball protege Eli Scott is a dynamic talent. Oh yeah, and they added Stanford's own Kodye Pugh in the offseason, after he opted to pursue his dream of film school. Don't expect LMU to roll over.

The Hornets won 16 games in 2019, but their top two scorers left the hive. Brian Katz has 8 upperclassmen at his disposal, though, and experience should prove invaluable after this topsy-turvy offseason. They should enter this game as sizable underdogs, but they held Colorado to 24 at the break last November. Stanford needs to avoid the post-finals lull.