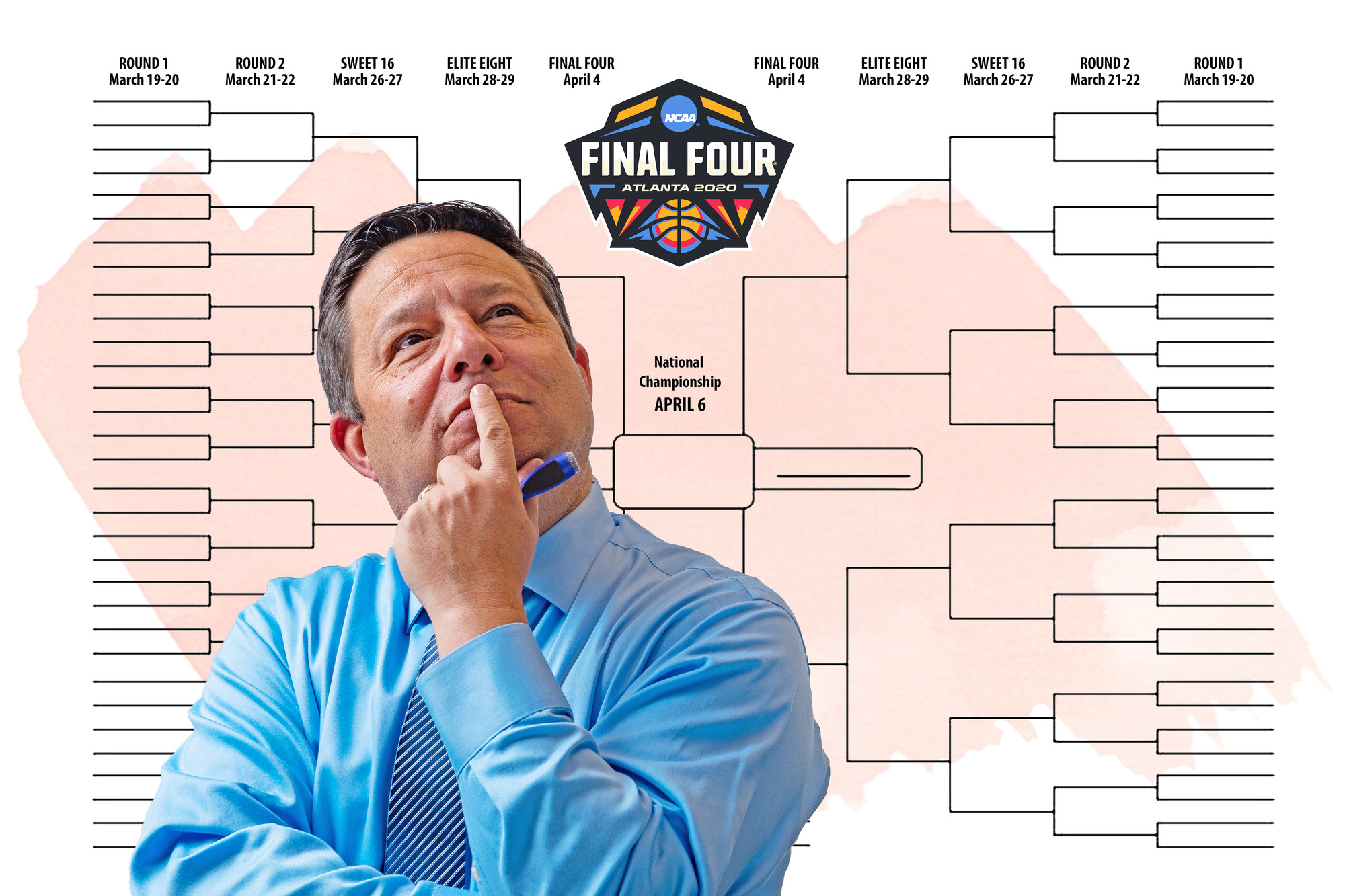 
For six hours on Tuesday night, I Zoom'ed with Joe Lunardi and nine other rabid college hoops fans to craft the 2020 bracket. When the dust finally settled, Stanford was en route to Dayton.

We were a ragtag bunch. There was a sportswriter from Illinois, an athletic director from Kansas City, a lawyer from New York, and even a math professor from Kentucky. Joey Brackets threw us together and, over the weeks of hours long Zoom calls, taught us to perform the duties of the NCAA Selection Committee.

Ah, Bracket Camp. In a time without real sports, grown men must band together and judge teams based on fake outcomes. I lobbied Joe to drop the results of March 11th, the first (and only) day of the Pac-12 tourney. I related the story of the casino refunding my bet on Stanford to win the conference tournament, suggesting it meant they didn't really lose. No dice.

We learned about the history of the selections, and how teams used to get bids for scientific reasons like "they run a Princeton offense which seems good for tournament play." Joe Lunardi is, by most metrics, no longer the most accurate bracketologist. But he is the one credited with essentially inventing the field, and turning it into the beautiful craze that it is today. He sees the most important legacy of bracketology as shining a light on how the sausage is made, to put public pressure on the committee to use real metrics and principles.

We convened on the hypothetical Wednesday evening for the first hour or two, with many of the conference tournaments in their early stages. Previously we had agreed on a list of around 30 teams that were locks, and another 20 or so that deserved at-large considerations. Stanford was in the "under consideration" column, as were USC, Arizona State, Colorado, and UCLA. Stage by stage, we each selected our top 8 teams from that column. The 8 with the most selections were then numerically ranked by each of us, sorting them into the top and bottom 4. From there, we were open to debate before committing the top 4 to the seed list. Stanford did not receive any early love.

Frankly, being on the committee is difficult. We're told to select the "best teams" but not given a clear definition of what that means. The team sheets have the results broken down by quadrant, location, and non-conference. They also feature outdated strength of schedule calculations, and 5 more computer rankings. Most prominently, they feature the NET ranking, which is not a published formula. The team sheets are ordered by NET, probably for the express purpose of making it impossible to find the team for which you're looking. Alphabetizing would be too easy.

With Joe's simulated results streaming in, our jobs became even more difficult. On Thursday night, Washington State upended Arizona State. We had previously felt pretty good about the Sun Devils, and Joe used this one as a cautionary tale about being cavalier with the "lock" term. Losing to the Cougars on a neutral court this year was a Quadrant 3 loss, and we had to decide how many true seed rankings that was worth. I asked Joe if the committee members approach things that way, or if they try to step back and reevaluate the resumes holistically. After all, Stanford had a number of opponents teetering between quadrants, and I paid close attention to which side of the lines they were on. He told me that the members typically overlook that, unless the member tasked with that conference makes a point of acknowledging it.

I was Charles McClelland, commissioner of the SWAC. This was exactly the role I wanted to play. There are only a couple of notable differences between members of the committee, outside of the chair and vice-chair. One is that they are each tasked with intently following three conferences during the year. They are to know everything about those teams, and to be able to answer questions or bring up important points when relevant to selection or seeding. For example, we had a long discussion about BYU's resume since Yoeli Childs missed a number of games, and the member tasked with the WCC gave his thoughts. My three conferences were the A-10, Summit, and America East. The main relevance was my opinion on Richmond, a team living on the bubble.

The other important difference in committee members is when they must recuse themselves. As the commissioner of the SWAC, I recused myself whenever we talked about any SWAC team. Which was all of five seconds during the seeding of 16 seeds. Athletic directors, like Duke's Kevin White, must only recuse themselves when it comes to their school (or their kin, since his son coaches Florida). I wanted to be a member who could take part in every key discussion.

We started to create a seed list, in a way similar to our bubble selection. Starting with the top line, we each chose 8, then rank ordered them, and discussed the results of the rankings before committing changes. Kansas went out early in the Big 12 tournament. As they were number 1 in most every metric, they were our overall top seed. We agreed that even an early exit wasn't enough to change that. Joe ultimately agreed with our call.

As simulated days passed and results came in, we used parliamentary procedure to move teams around. The number of bubble spots dwindled, and we started to have a vote to add the final teams to the field. These teams weren't safe, as there were still bid-stealers (like Washington State) alive and kicking. But to be left off this list and out of games spelled doom. We were allowed to add and remove teams to the "under consideration column." Some, like Saint Louis, dropped off. Others popped in.

Selecting the final bubble teams is gross. It really is getting down to the dregs at that point, believe me. One member asked Joe how they like to differentiate at that level. He mentioned that they often look at the quadrant 1 and 2 wins more heavily. We held our vote after a crimson-hot Wazzu marched past UCLA, deeply bruising the Bruins' hopes. The final two spots came down to Stanford and Texas, and discussion ensued. Up to this point, we had largely eschewed discussing raw NET rankings. But I curried favor for the Cardinal by pointing out their 37 slot advantage over the Longhorns. After getting the votes, Stanford was tentatively moved to the right side of the bubble.

They wasn't safe until the final moments. Any bid stealer would knock out the final team in the field, and there were several still alive. Richmond beat Fordham and Dayton to cap off their A-10 tournament victory, and suddenly the Spiders moved from the bubble to an AQ. Things were getting precarious. That's when I motioned to scrub our seed list by swapping Cincinnati with the team below them, NC State. The Bearcats, I pointed out, had a poor quad 1 record, no marquee wins, and a shocking 4 quad 3 defeats. NC State had added a simulated win over Duke, so the voted carried with ease. Cincy was now just one spot ahead of Stanford.

USC clobbered WSU in the Pac final, and we all breathed a sigh of relief. Seeding the Cougs would've been a conundrum. The Big East final of Seton Hall and St. John's went into a double overtime, mostly so Joe could chuckle as he gave us invented updates. The Pirates prevailed, and now there was just one bid stealer alive. The AAC final featured Tulsa, a team that had been under consideration, but never in a significant way. I knew Stanford would likely need to advance a spot to feel safe.

Before the end of the AAC title game, I motioned to swap Stanford and Cincinnati. The committee members looked again at wins on the quads 1 and 2 line. Cincy had a better overall record there, thanks to a 7-0 pre-tournament quadrant 2. But the members kept coming back to Stanford's statement wins over Oregon and Colorado, far better than the best the Bearcats could boast. Adding in those 4 quad 3 losses and the Cardinal's 33 NET ranking provided enough to promote Stanford to the penultimate place in the at-large field. When Tulsa pulled off their upset, the Cardinal were safe and sound.

After the final games concluded, we scrubbed the entire seed list. For example, I lobbied to swap Oregon down a couple true seeds due to their loss to WSU. Then we started the arduous process of placing the teams in the bracket, as well as assigning regions and sites. There are quite a few quirks at play. My favorite is perhaps that BYU cannot end up in a site with a Sunday game. We muddled through ways to properly bracket the middling Big 10 teams, and before we knew it, we had ourselves a full bracket.

Stanford ultimately ended up in Dayton, playing NC State. A win would have meant a trip to Albany for a date with Michigan. The other game there was 3 Villanova versus 14 UCSB. This was in the East Regional, with the second weekend slated for New York.

Joe seemed to think Stanford could have been left out, even after UCLA's clunker. The Bruins did finish second in the regular season, after all. But he conceded that the Stanford selection would not have surprised him, and that some members might have valued the right things to bump them in. It was 50/50 with those simulated results, in his mind. Like most of our bracket, he thought our seeding was reasonable.

At the end, he asked if any of us knew how many Big 10 teams we had included. We didn't. He knew we didn't. The point he was making is that numbers like that don't normally come up in deliberations, regardless of what the media says. Neither do the invented storylines. He says that a 68 team, 67 game tournament inevitably has storylines aplenty. I'm inclined to agree.

So there you have it. In Joe Lunardi's Bracket Camp, I worked with 9 other freshly minted bracketologists to build a hypothetical 2020 field. And Stanford made the cut. I'm going to go ahead and take this as gospel and assumed it's what would have happened. They realistically had slim hopes, and needed many of these things to have gone right. But I guess we'll never know, so this is good enough for me.