Elway turns sixty years old, so here are some of his most memorable moments 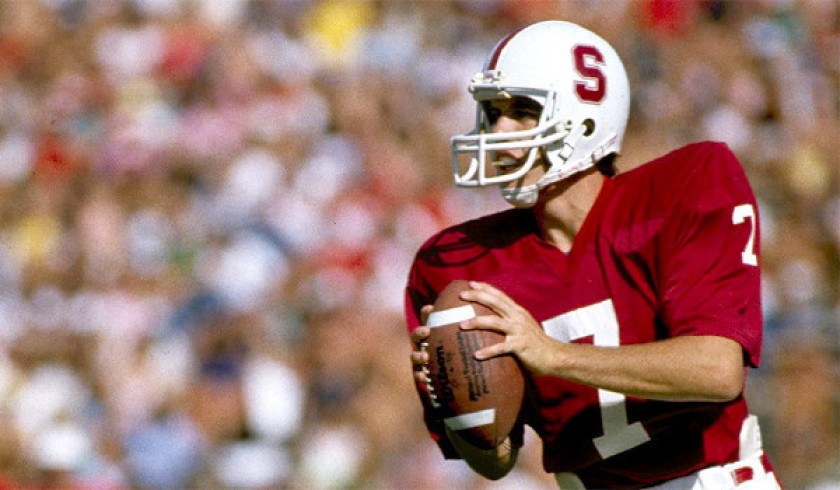 
Another day, another Stanford legend’s birthday. The Duke Of Denver AKA Wood AKA John Elway turns 60 years old today and what a 60 years it has been. From breaking records on The Farm to winning Super Bowls to opening up an expensive steakhouse, Elway has had a storied career unlike few others. We will take a look at a few of his most memorable moments:

Starting the Heisman Runner Up curse

Any Stanford football fan knows not to get their hopes up when it comes to the Heisman. Since 2009, four Stanford players (Andrew Luck twice) have been named Heisman runner up. Whether it’s undeserving Alabama running backs or historic quarterback seasons, the Cardinal cannot seem to catch a break. But this trend began in 1982, when John Elway’s senior season was not good enough to beat out Georgia running back Hershel Walker’s campaign.

The curse might have begun with Elway, but if you take a deeper look, it was actually Cal that started it. Elway lost the Heisman in large part due to not making a bowl game. His Cardinal team would have earned a bid if it didn’t lose the 1982 Big Game. This game was infamous for “The Play”, and no other words are needed to describe the incident. Elway loses his bowl bid, loses the Heisman, and every Stanford Heisman candidate will be cursed to second place. Those damned Bears!

Eli Manning was not the first quarterback to refuse to play for the team that drafted him and then win two Super Bowls. Elway was drafted first overall by the lowly Baltimore Colts. Elway, who was a star football and baseball prospect, decided he would rather be on the diamond than put on the pads for the Colts. Baltimore would trade the young Elway to Denver a week later cementing two decades of success for the Broncos. Maybe the equine connection had something to do with it?

Every kid dreams of being the hero in the waning moments of the game. Basically, every kid wanted to be John Elway, who is second in NFL history with six game winning drives and sixth with 31 fourth quarter comebacks. Elway had his most signature comeback in the 1986 AFC Championship game against the Cleveland Browns. Creatively named “The Drive,” Elway facilitated a 13-play, 98-yard touchdown drive to send the game into overtime. The Broncos would prevail in OT delivering a Super Bowl berth and cementing Elway as the comeback king.

In 2011, Elway became the general manager of the Denver Broncos, and he was tasked with bringing a third championship to his beloved team. Elway knew the importance of having a geriatric quarterback, and he managed to bring in future Hall of Famer Peyton Manning to helm the offense. It seemed to pay off in 2013 when the Broncos broke numerous NFL records on offense and made it to Super Bowl 48. However, Elway and his team could not buck the Seattle Seahawks and lost 43-8.

Before the 2015-16 season, Elway hired Gary Kubiak as head coach with Wade Phillips as defensive coordinator. His reconfiguration of the Broncos proved fruitful as Denver rode No.1 defense to Super Bowl 50 versus the Carolina Panthers. The defense held up to its reputation and the Broncos won its third Super Bowl 24-10, redeeming Elway and Manning.

By the 1997 season, John Elway had done it all -- Pro Bowl, All-Pro, MVP, Heisman runner-up -- except to win the Super Bowl. Three times his teams reached the apex and three times he came up empty. However, the then 37-year old quarterback was not deterred as the Broncos made it to Super Bowl 32 against the Green Bay Packers. No AFC team had won the Super Bowl since 1983, and the Brett Favre-led Packers were 11.5 point favorites.

The game was tied at 17 with 2:16 left in the third quarter. Facing a 3-and-6, Elway snapped the ball and almost immediately cantored to his right before bursting into a gallop forward. Before reaching a first down, the old Elway jumped and collided with three Packer defenders. The hit sent Elway spinning like a helicopter rotor into an eight-yard gain and a first down. A couple of plays later, running back Terrell Davis scored a one-yard touchdown which helped the Broncos and Elway win their first Super Bowl. The play epitomized Elway’s determination to finally win the big one after being denied for so long.

Which Elway moment is the most memorable? Let us know in the comments! Also, if anyone has been to his steakhouse, is it any good?

I've been to Mike Ditka's steakhouse. Elway's has to at least be better than that