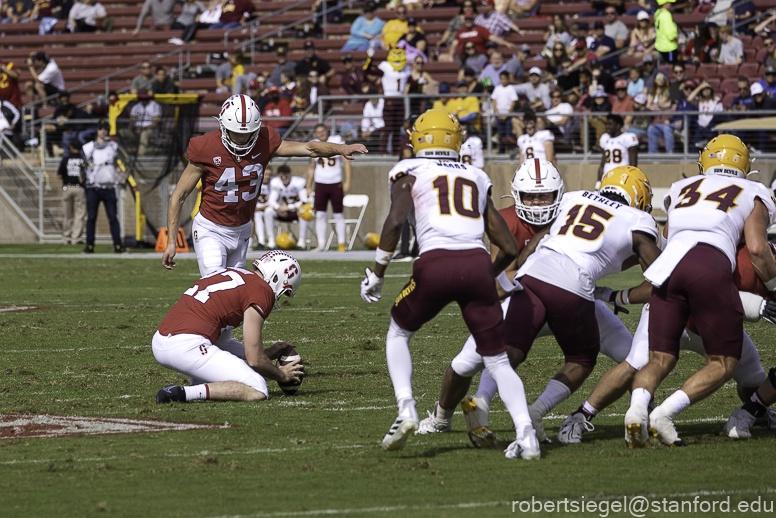 
Stanford is on a two game winning streak, and they have needed just one touchdown to do it.

A lot of people might look at the fact Stanford has scored 16 and 15 in the last two respective weeks and make things about the offense. Those people would be right. But regardless of the level of competition, Lance Anderson's defense deserves credit for turning things around. And we're here to give them that credit.

Arizona State opened the afternoon with touchdowns on their second and third drives of the game. They looked awfully good doing it, too. They went 75 yards each time, needing 6 plays and then 7 more to hang 14 on the board after just 16 minutes. They would fail to put up a single point the rest of the game.

"We have a mantra on our defense, we want to get excited when get put on the field," said junior EDGE Lance Keneley. "Defense is an exciting part of the game, and you have to want to play defense and do your best." Lance finished with a team-high 10 tackles, including 1.5 for a loss.

In particular, the play of the defensive line has been inspiring. This was always considered a thin group, at least in terms of experience. To make things more difficult, they entered today without stalwarts Aaron Armitage and David Bailey. But this unit has a next man up mentality, and one of those next men was freshman EDGE Ernest Cooper.

Ernest entered as a highly ranked recruit and was twice named a Scout Team Player of the Week this season. The talent is there, all he needed was an opportunity. He certainly made the most of that against Arizona State.

"It didn't surprise us because what we've seen every single day at practice, [Ernest's] gotten better and better," said David Shaw. "His length, his speed, his athleticism. We knew he was going to be a superstar. We just didn't know how soon."

Most importantly, the defense is starting to make big plays. Two plays after a Nicolas Toomer interception was called back, Levani Damuni picked off another pass. They collectively racked up 10 tackles for loss, including 4 sacks. And none of those were bigger than the one on the final Arizona State drive.

Arizona State's final drive is remembered by that incomplete pass on fourth down, where we all thought the Sun Devils completed a bomb until replay showed the receiver's foot was out of bounds. But those inches would not have been necessary without the massive sack by senior Stephen Herron on first down. ASU started that set of downs on the Stanford 34, right on the edge of field goal range. Without gaining another yard, they would have had a chance at a game winning kick. They had plenty of time, too. Stephen showed why he is one of this defense's top playmakers by not only sacking Emory Jones, but also forcing a fumble. With no timeouts remaining, ASU was forced to clock the ball and waste a second down. First and 10 turned into third and 19. Stanford's win probability jumped from 64% to 92% in the blink of an eye thanks to Herron.

The real story of the game is Joshua Karty's five field goals, and he cannot get enough praise. He has started the year 12-12, with 9 of those coming beyond 40 yards. He has NFL upside, and is unironically one of the best weapons this team has. When Stanford crosses the opponent's 45 yard line, they always have the chance to get at least 3. He should be a legitimate candidate for the Lou Groza Award, given out to the nation's best placekicker.

Tanner McKee threw an eye-popping 57 pass attempts today. Yurosek, Humphreys, Tremayne, and Higgins all eclipsed 60 yards receiving. In spite of that, there were plenty of offensive issues. The Cardinal did not have a single three-and-out, but they seemed to have the inability to produce in the red zone. In the third quarter it briefly looked like Tanner and Elijah Higgins had connected for a touchdown on fourth down, but a holding penalty brought the play back. Things will not get easier, as Stanford is now without its top two running backs after Casey Filkins' injury today. Caleb Robinson had a few hard runs late in relief, but there is a certain dynamism and power lost.

The win snapped a Pac-12 losing streak that spanned more than a calendar year, and gives the Cardinal a nice two game winning streak. The defense is coming into its own, and the special teams is as solid a unit as there is in the country. For today, no touchdowns were necessary. But, just going out on a limb, they will need to score at least one to beat UCLA next week.