Getting to know the Huskies 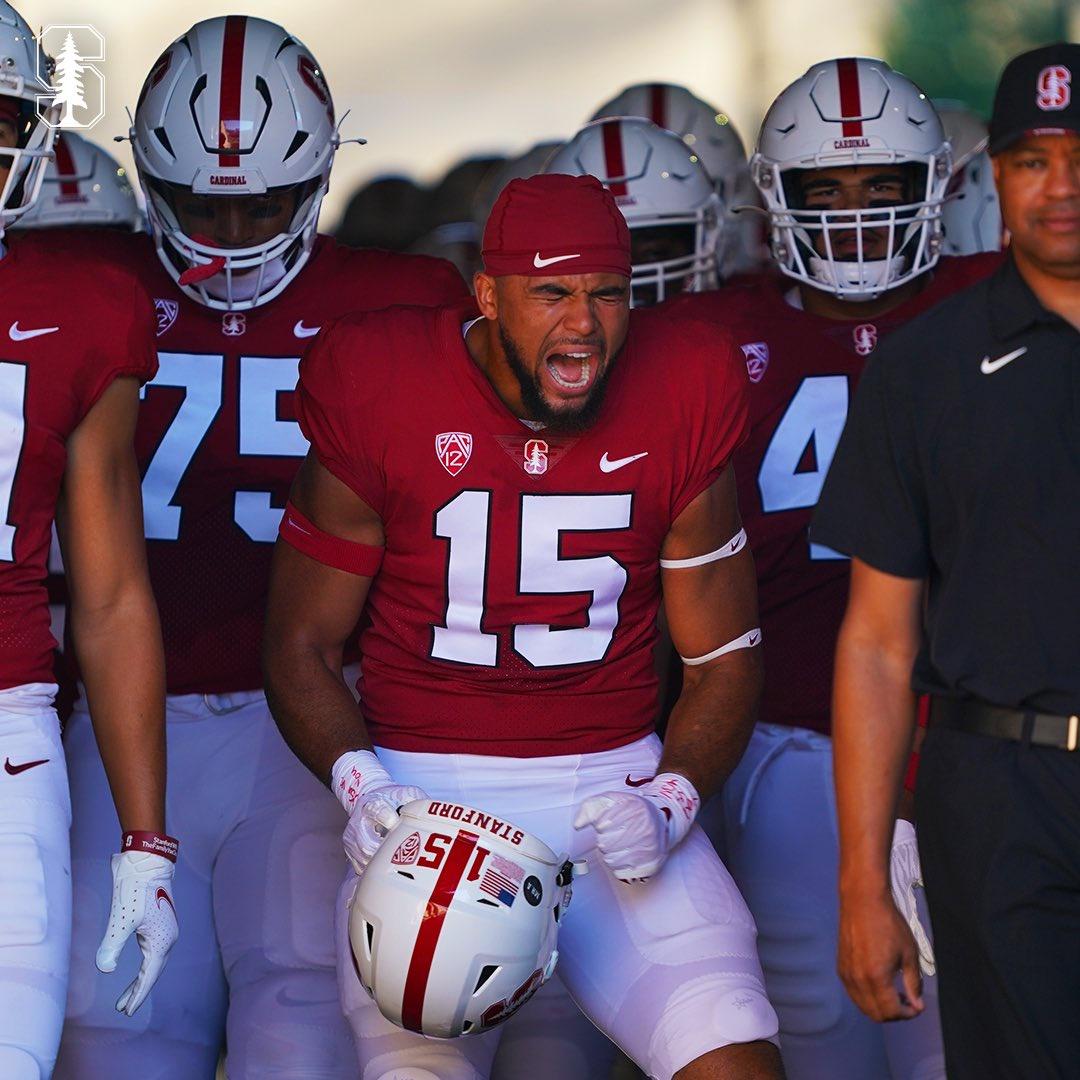 
Stanford (1-1, 0-1 Pac-12) heads to Seattle on the heels of a Week 3 bye. They hope to bounce back after a turnover filled loss to USC, and will have to do so without RB E.J. Smith. Washington (3-0, 0-0), meanwhile, came up with one of their biggest wins of the last few years with a home drubbing of a ranked Michigan State. We caught up with UW Dawg Pound's Max Vrooman to give us the scoop on the Huskies.

Washington is coming off a beatdown of a ranked Michigan State. What have been the keys to the early season success? And how does it feel to be ranked behind the Spartans in the Coaches Poll?

By far the biggest reason has been the way that the new coaching staff and QB transfer Michael Penix Jr. have completely revamped the Washington passing game. Coach Kalen DeBoer and OC Ryan Grubb have had success throwing the ball everywhere they’ve gone and there was cautious optimism it would take hold early in Seattle. But I don’t think anyone foresaw Penix suddenly being a top-6 Heisman candidate through 3 weeks and an offense that has scored a TD on 12 of 16 first-half possessions so far.

As far as the Coaches Poll goes I think most fans just view it as further proof that it needs to go away. No coaches have time to watch all the games each Saturday which means some grad assistant fills them out and there’s no accountability for ridiculous outcomes such as this.

You moved on from Jimmy Lake quickly, which is looking like a great decision so far. What have you seen from Kalen DeBoer as he works to put his stamp on the program?

DeBoer placed an instant emphasis on culture as he worked to undo the damage caused by Lake’s tenure. A few players transferred out but he kept the core together and sold them on his vision for the program. It’s a cliche at this point but new strength coach Ron McKeefery did an awesome job in offseason workouts and every player that wore player trackers in both 2021 and 2022 set new speed records this offseason. On top of the somewhat intangible elements he also put in an actual modern offense which is probably the biggest part of all of it.

Your leading passer and rusher are both transfers. How do you feel about the growing influence of the portal?

It has definitely been a net positive for Washington so far. It feels bad when a player like WR Jordan Addison can leave after the spring after winning the Biletnikoff at Pitt to go to USC but it makes an instant rebuild much more possible. In addition to QB Michael Penix Jr. (Indiana) and RB Wayne Taulapapa (Virginia) the Huskies also had last year transfer WR Ja’Lynn Polk (Texas Tech) put up 150+ yards and 3 TD against Michigan State. I can see why Stanford fans might see only downside with the portal given the difficulty of admission standards for transfers but if you have a good coach and are lucky enough to be in the “haves” then it’s extremely helpful to plug holes.

If Washington wins on Saturday, what will be the main reason?

A Husky victory would likely mean that Stanford couldn’t do anything to slow down the Penix passing attack. Only one time has Washington failed to either score a TD or gain 50 yards on a drive on offense in the first half. If that trend continues and the Dawgs have put up 28+ points at halftime yet again then it’s going to be difficult for Stanford to be able to keep pace.

If Washington loses, what will be the main reason?

By the end of the Michigan State game the Huskies were down 3 of their 5 opening day starters in the secondary. That’s a position that has traditionally been a strength but was viewed as thin entering the year and was certainly a weakness against the Spartans. The opening day starting corners are expected to be back and playing against Stanford but there’s a chance the Cardinal can light up Washington’s secondary anyway. If the O-line can keep Tanner McKee upright then he has the potential to shred the back end of UW’s defense. The Huskies can’t run the ball very well and so holding leads may be an issue with a leaky secondary and an inability to run out the clock on offense.

This should be a high scoring affair similar to the USC/Stanford game from a few weeks ago. Something in the neighborhood of Washington 37, Stanford 30 feels right. I’m nervous though about how well this team handles expectations all of a sudden until I see them get through it. The last time UW was ranked was the preseason last year when they came out and lost to Montana at home 13-7. I need to see the Huskies cover the spread in a spot like this before believing they’re suddenly going to cover a ~13 point margin.

What is your dream Pac realignment scenario? And how are you feeling about those traitors in LA?

I outlined my truly a dream scenario in a piece I wrote back in July. That is legitimate fantasy though in a situation where I could start completely from scratch with no basis in reality. Moving forward I’m torn. If the Pac added San Diego State and either Fresno State or Boise State and then allowed Gonzaga in as a basketball-only member I wouldn’t hate staying put. I love the regionality of college sports and especially on the back of the news that Bedlam is going away with Oklahoma’s move to the SEC I don’t like the idea of leaving.

At the same time there’s no question that Washington’s best shot at ever coming close to a national title again comes with a move to the Big Ten and the corresponding influx of cash. If UW does eventually get the B1G invite then I’d probably like it to be with Oregon, Stanford, and Notre Dame. In that case I want the Apple Cup to survive as an annual non-conference game and guarantee the Oregon rivalry in conference play plus at least one game annually against one of Stanford/USC/UCLA.

Below is a graphic that contains every Stanford Tree costume to date (except for the most recent 2). Which is your favorite, least favorite, and why? What sort of Tree would you make if you had the choice? 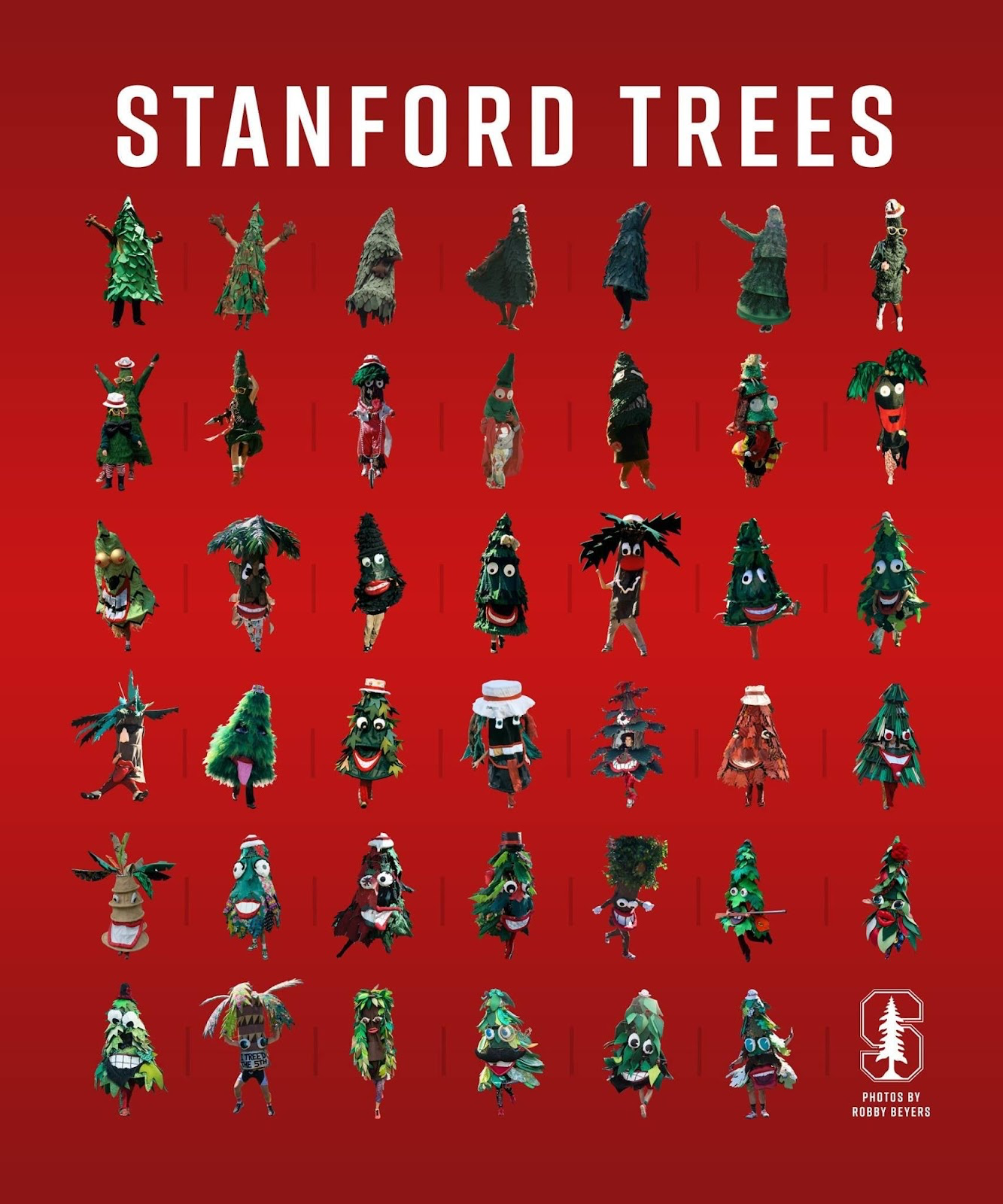 In 3rd grade I had to write about a sea animal and then create a costume of it. My parents and I worked all night making a sea turtle out of paper bags. At the next parent-teacher conference the teacher praised my parents saying every other kid had their parents help them but clearly they let me do it myself. That is to say that there is not a shred of artistic creativity in my body and I come by that honestly. Making a tree sounds like pure torture and I’m also about the least qualified person on earth to judge from this grouping. They’re all wonders of modern industry compared to what I can fathom building from scratch.