UConn Not Be Serious, Huskies defeat Stanford in Final Four 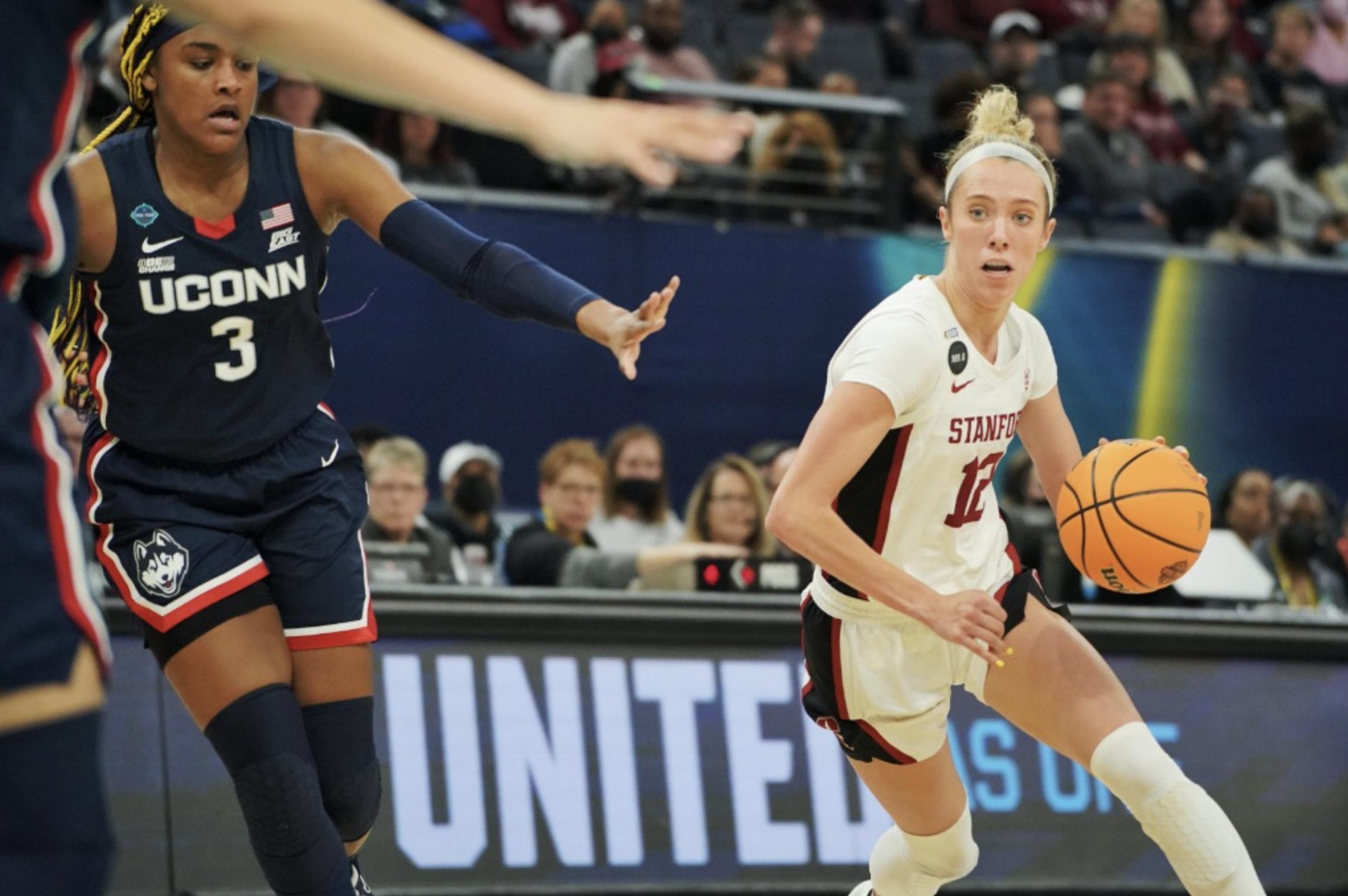 
For me, every jumpshot is like a prayer. Every make is an answer from God that you put in the work and effort to play the game of basketball. Unfortunately, God is a Huskies fan and so every jump shot was answered with a thunderous brick. Even Huskies head coach Geno Auriemma admitted as much.

“Fortunately for us, Stanford didn’t have its best stuff,” Auriemma said in the postgame interview. “We made a couple big plays, and by some unknown miracle, we’re playing Sunday night.”

“We really struggled on offense,” Stanford head coach Tara VanDerveer said. “When we looked good, we got the ball inside to Cam [Brink]...but we didn’t really get on the offensive boards the way we needed to.”

The Cardinal outscored the Huskies 34-16 in the paint, had eight fewer turnovers, and had one more bench point. That often results in a big W, but the biblically bad shooting performance meant that whatever Stanford did well was undone.

Stanford was ranked 24th in the country in three-point percentage at 35.47% heading into the game. The adage is live and die by the three, but the Cardinal are good enough to live another day on most nights. Tonight they died and died.

They shot a combined 4-23 from the long arc. The percentage for those unwilling (probably from sadness) to do the math is 17.4% and that’s rounded up to the nearest tenth to make it seem better.

Aside from the threes, the Cardinal couldn’t get into their offensive sets cleanly as the Huskies defense stayed glued to the Stanford off-ball players.

Senior guard Lexie Hull, after having a tremendous tourney run, shot 2-12, and her hustle and defense could not overcome her lack of offensive output. The other senior guards Lacie Hull and Anna Wilson combined for four points, but Coach VanDerveer had only praise for her veterans.

“‘I don’t think one game can define Lexie or Lacie or Anna Wilson,” VanDerveer said. “This was not [Lexie’s] best game. But I wouldn’t trade her for any player. She’s an absolute warrior.”

“I think they were definitely good looks,” Jones said of the team’s shot selection. “I know I wanted some of those shots back where I had good looks. What are you going to do? The ball doesn’t always go in the basket.”

If both teams were nervous coming into the game, it showed in their poor shooting starts. The teams combined to shoot 3-17 in the first five and half minutes to begin the game.

The Cardinal picked it up a bit, but the offensive woes continued until the end of the first quarter as the Huskies led 12-9.

Stanford shot 4-16 from the field and 0-2 from three in that frame.

The second quarter was an offensive renaissance relative to the first. Stanford scored 17 points in the quarter on 7-14 shooting and even took its first lead of the game with a layup from Jones with 1:20 on the clock.

The Huskies took a 27-26 lead into halftime.

While the Cardinal were able to overcome sloppy first halves earlier in the tournament (against Kansas and Texas), they could not do it against UConn.

They scored only 11 points on 4-16 from the field and 1-9 from the three in the third quarter. The saving grace was that their defense held the Huskies to only a two point cushion heading into the final quarter.

But two quick fouls on Brink and more missed threes put Stanford on the brink of elimination.

Feeling the end of their season near, the Cardinal made a quick rally to cut it to a 60-58 Huskies lead with 18 seconds left, but that would be the closest before falling to UConn.

The Huskies hit 15-17 on free throws in the fourth quarter, allowing them to keep Stanford at bay.

“I’m really proud of our team,” VanDerveer said. “I thought we had a great season. I think the leadership of our seniors was really special. But all in all, we just came up short, and we lost to a really good team. Connecticut played very well.”

Sam and I, who were onsite at the game in Minneapolis, were also very much Niagara Falls.

As an aside, I got to sit next to a man named Dick Cox who covered the South Carolina Gamecocks for the Cox Sports Broadcasting. Well, there was no man since his seat was empty the entire time and only his blessed name adorned his empty assigned seat. It was like he was born for it.