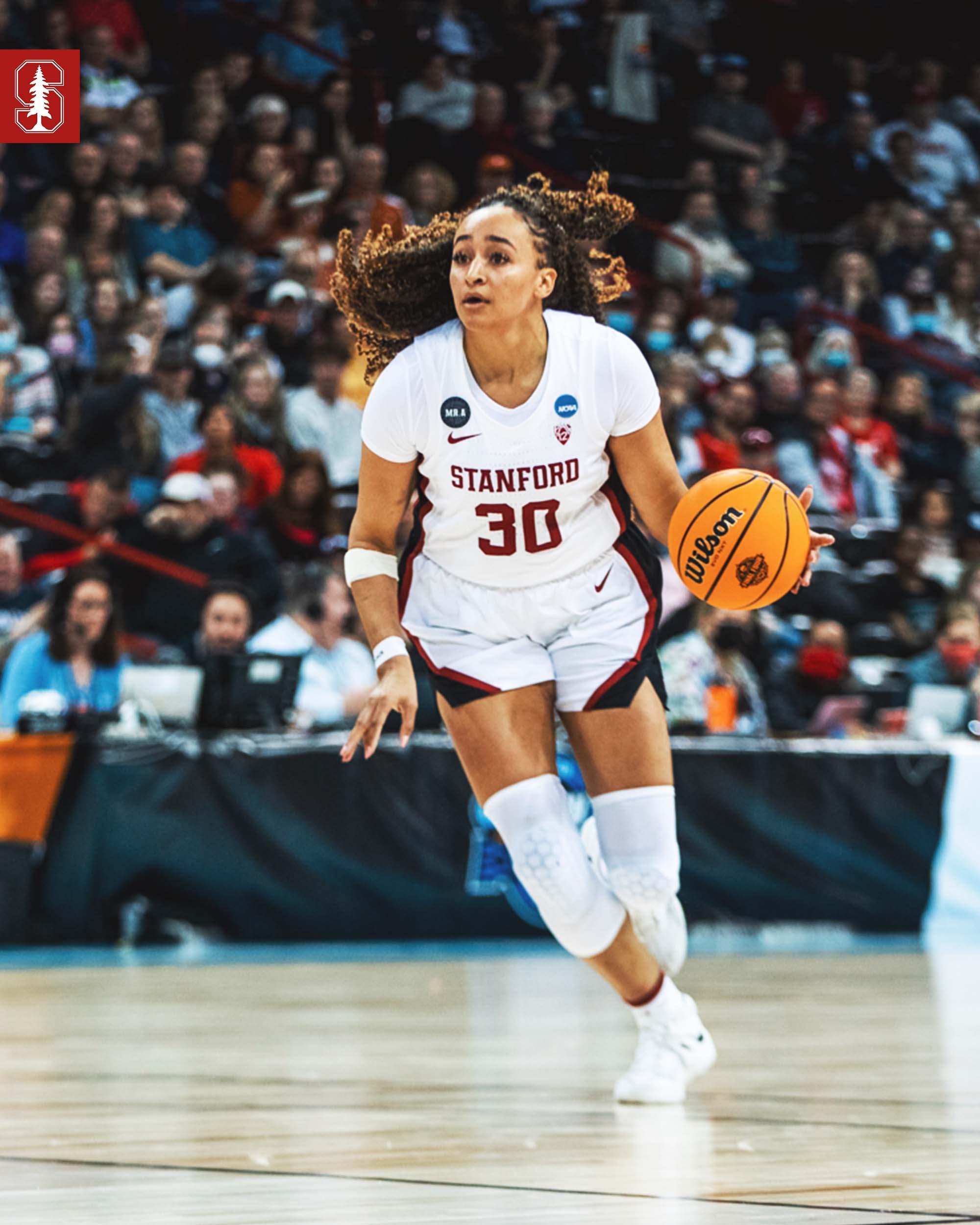 
On Friday night, Stanford took care of business in Spokane, putting away 4 seeded Maryland 72-66 for the right to advance to the Elite Eight--their 22nd Elite Eight appearance in program history.

While the score implies a close game, Stanford was in control for the duration, up 22-10 at the end of the first, 39-23 at half, and 59-36 at the end of the third. Maryland's impressive 30-13 run in the fourth quarter was the product of a forgone conclusion, and the Terps never got closer than 9 in the second half until a last possession three pointer.

Three Cardinal scored in double digits. Lexie Hull continued her hometown heroics with 19 points and 9 rebounds. Cameron Brink added 15 points, 8 rebounds, and 5 blocks--though she fouled out late in the fourth quarter. Finally, Haley Jones notched the solo double double with 17 points and 10 rebounds, plus 6 assists for good measure. Jones has been quiet in the tournament thus far, accounting for just 11 points in the first two rounds. A vintage performance against Maryland is a good sign as the Cardinal enter the later rounds against 1s and 2s.

Stanford and Maryland met earlier this year in November, a game which ended with an 86-68 Stanford victory. In that game too, the score hides how dominant the Cardinal were. At half, Stanford was up 46-24 on a Maryland team ranked No. 2 in the country at the time. That's an upside down turtle if I've ever seen one.

Maryland had the luxury of playing (and losing to) three tournament No. 1 seeds this year: Stanford, South Carolina, and NC State. When asked whether Stanford is the best team in the country, Coach Brenda Frese replied:

"No question. I have been fortunate with the No. 1 seeds we've played. Their length, the way they pass, the way they can score the basketball, and obviously that length gives you fits on the defensive end with their size. We really struggled on the offensive end. I've said it all year, I don't think they probably get even enough credit on the west coast nationally of what they've done all year. That's their 23rd straight win in a row. The deepest, most talented team I've ever faced."

I don't knock the committee for not granting Stanford the No. 1 Overall seed--South Carolina had the head to head and a few more ranked wins--but I'll take any chance I can get to decry East Coast Bias.

Still, as Coach Tara said, "I think we can do better." Sure, Stanford won the boards battle 50-32, but they lost the turnover battle 18-7. Tara continued, "I think depth is the reason we're sitting here today having a game on Sunday."

Up next for the Card is... another rematch, this time with Texas, who beat Stanford in Maples 61-56 in the second game of the season, spoiling the Card's ring ceremony. The No. 2 seed is hot after dethroning Baylor in the Big 12 Title game and knocking off a tough Ohio State team in the Sweet Sixteen. Coach added her thoughts about whether a previous bout bodes any advantage:

"Having played a team -- I'm glad we played them and we were up five going into the fourth quarter and we didn't do what we needed to do. So I don't think anyone on our team has forgotten about that. I know they're better and I think we're better. It's going to be a great game on Sunday and our team will be ready and we will learn from this game and we will move on."

Stanford and Texas play tonight at 6pm PT on ESPN. Horns down baby, the Final Four is on the line.