Comeback of the Year? Stanford Stuns Oregon in Eugene 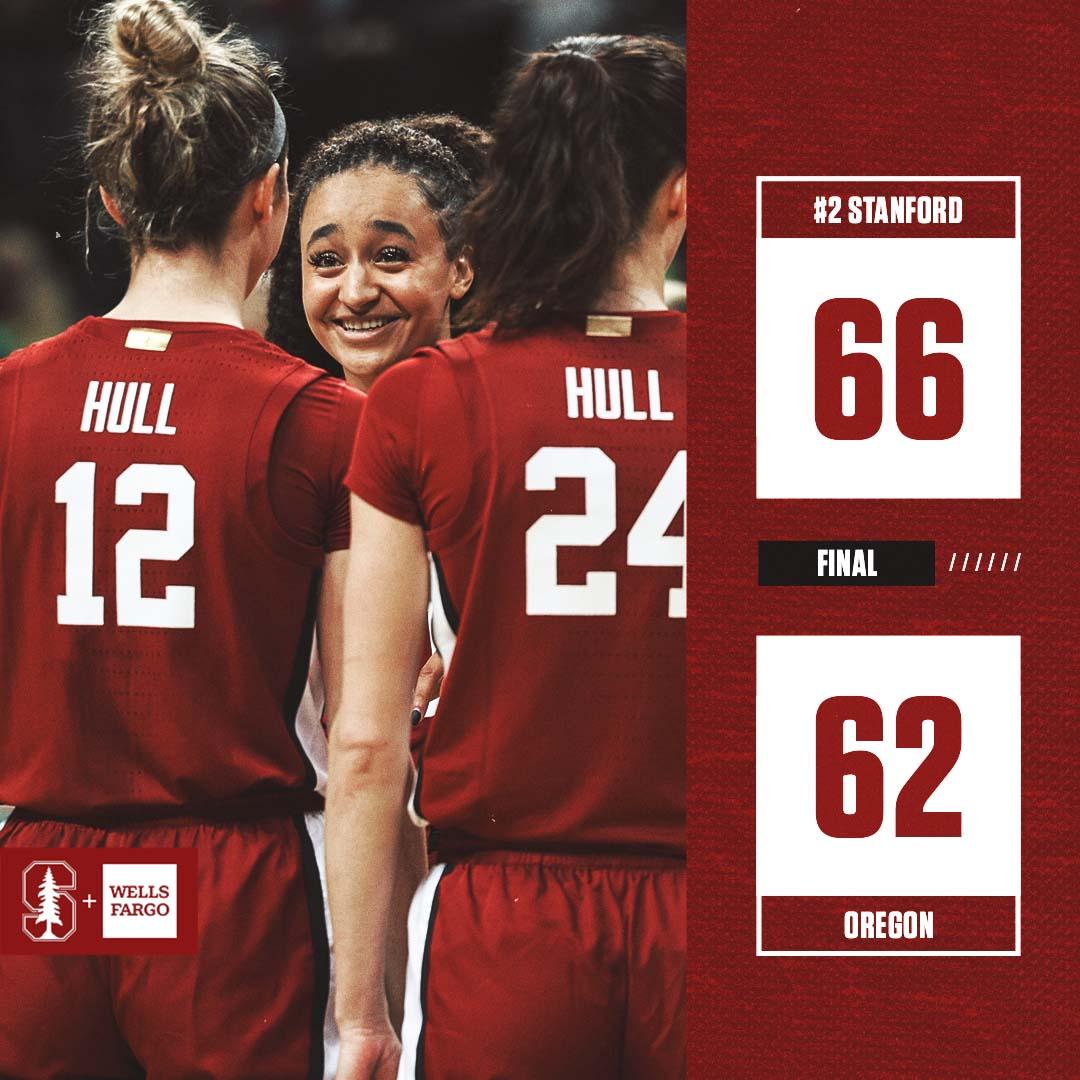 The game started out with an oddity--Oregon was called for an "administrative foul" due to a faulty backboard light (you'd think Nike money would prevent these types of things!!!), and so Stanford was gifted a free throw and a 1-0 lead before tip off. They wouldn't lead again until the final three minutes.

But Stanford wasn't merely trailing throughout, they were bombing. Most things that could go wrong, did go wrong. Case in point: they shot a certifiably rotten 1 for 11 to open the game, and the law of large numbers didn't exactly kick in as the minutes elapsed, the team's ending splits being a lousy 35.4% from the field and 18.8% from deep.

Abysmal shooting led the card to an early 11 point deficit, and while they were able to fight themselves to within a few scores consistently, Oregon kept edging ahead, controlling the game beat by beat.

For example, just when Stanford got a clutch layup to bring it within three with 8 seconds left in the half, Oregon squeaked in a buzzer beating layup. No gut punches were pulled by the Ducks.

Cameron "double double machine" Brink was not herself. She would go on to notch just 8 points on the day, a total that only barely beat out her personal fouls on the night (we'll get to that). The Hull sisters were contributing to the team's lousy shooting percentage. Haley Jones was quiet. But the Card continued to hang around, in large part thanks to freshman forward Kiki Iriafen. She provided a stalling offense with a much needed energy bomb, and would eventually come away with 11 points on the night, plus a couple blocks and some critical rebounds.

With 8 minute left in the fourth quarter, Stanford's deficit had increased to 10. Could they mount a comeback? Would our stars step up? Would another bench player become Tara's proverbial "soloist" of the basketball orchestra?

Enter Haley Jones. Some players can just will a team to win. There's no other explanation for the final half of Sunday's fourth quarter. Haley went on a rampage, scoring 10 points in the final five minutes. Only two scores weren't hers in the period, and for one of those, she dished the assist.

But remember when I said most everything that can go wrong did? Well in addition to dismal shooting split, in addition to the gut punching buzzer beater, just as Stanford tied it up for the first time on the night with a minute and a half to go... Cameron Brink fouled out.

Fortunately, as alluded to, Haley has a god mode. Post-Brink-foul-out, Haley metamorphosed into an unflaggingly fierce, unstoppable juggernaut and drove to the basket. Heavy contact has her falling to the floor. What does she do? She gets a shot off.

Don't believe me? Witness greatness yourself:

ASIDE: Let's take a moment to pay due props to the AP's Thomas Boyd because this photo is immaculate. It's the play of the game, showcasing the inflection point wherein Stanford snatches the lead back. It's the story of the game, because it depicts the evening's motif: Haley being Heroic™️ against all odds. And also it's just a dope picture. Look at that fallen Oregon player, just another gaudy painted fir felled by a true Tree. Photographers rule.

In one fell Haley swoop, Stanford stole the lead back from Oregon and the game's tides turned irreversibly. Stanford comes away to win it 66-62 in the best comeback win against Oregon since the football team's OT win last fall. It must be rough being an Oregon fan when Stanford's on deck.

Jones led the team with 18 points and 9 rebounds. Iriafen added 11 points and 5 rebounds. Surprisingly, Stanford won the turnover battle 8 to 16, reversing a trend seen in many lackluster performances.

Oregon's Te-Hina PaoPao was superb with 23 points, 5 rebounds, and 5 assists, but the effort just wasn't enough. Despite the loss, Oregon did reappear on the AP Top 25 poll this week after falling off in previous weeks.

The moral of the story? This team is deep and anyone can show up. In my last article, it was a star in Cameron Brink and an up-and-comer in Jana Van Gytenbeek. Here, it was another star in Haley Jones and another up-and-comer in Kiki Iriafen. It's a winning formula, and I for one can't wait to see it in March.

Speaking of winning, Stanford now has a 14 game win streak and is undefeated in conference play this season. Just two games to go before the Pac-12 basketball tournament: Washington State on 2/24 at 8pm PT and Washington on 2/26 at 12pm PT.

We'll see you there.