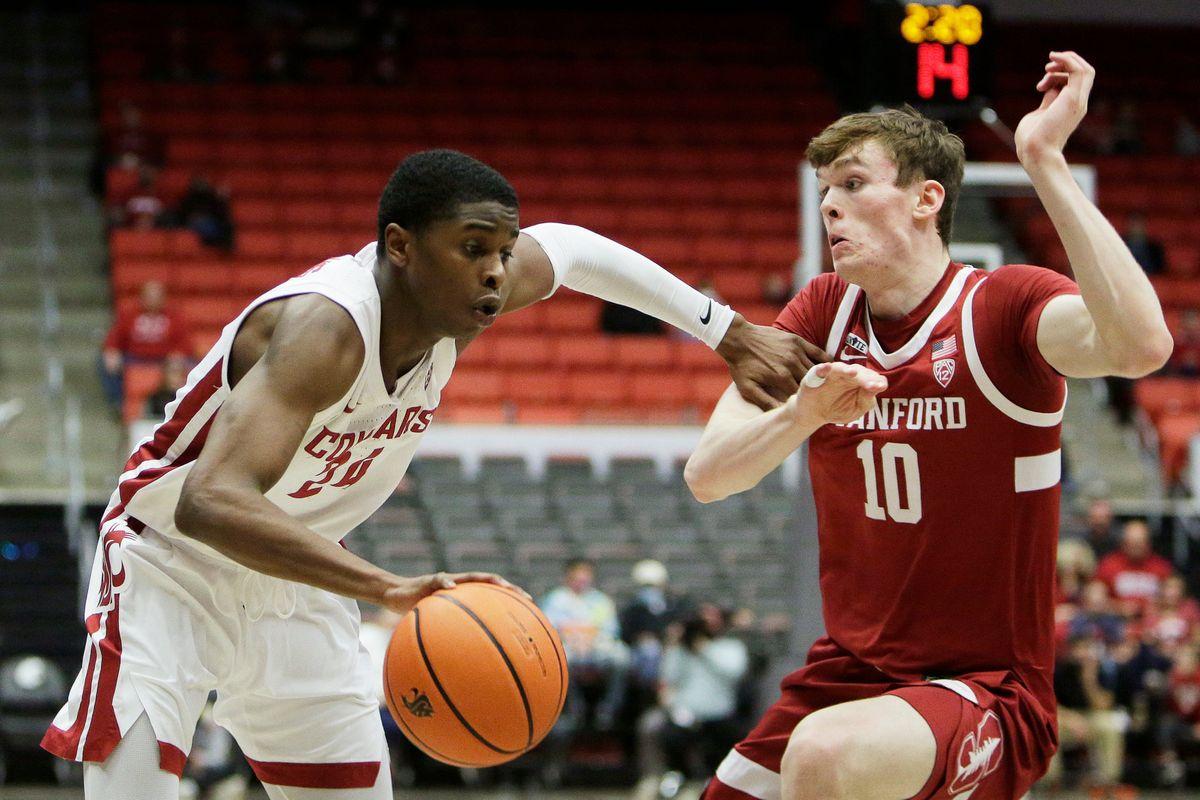 
No one could recall seeing anything like it. I know I did a Google search or two myself. After falling down 11 points in the second half, Stanford (10-4, 3-1) held Washington State scoreless for more than 12 minutes, and without a field goal for more than 14. That 23-0 run proved to be enough to power Stanford to their fourth straight victory.

This game was delayed for more than an hour, and perhaps at risk of not being played, due to testing complications in the Washington State program. The players were on the court and ready to play when the delay was first announced. They originally said it would take about 10 minutes, then extended that to 30. When it was all said and done, the game tipped 75 minutes after the initially stated time.

Perhaps it was the unexpected delay, or maybe it was the hangover from Tuesday's thrilling upset of USC. Whatever the cause, it took Stanford nearly five minutes to get on the scoreboard. That is, unless you count fouls, because they racked up five of those in the game's first three minutes. They struggled to get shots against a good Cougars defense, and for a good stretch had more offensive fouls than attempts from the field. WSU led 7-0.

The Cardinal were lucky to keep it a single digit game going into the break, as a desperation three from Spencer Jones made the deficit 35-26. Seven different players recorded a turnover in that period. And most importantly, they had no answer inside for freshman big Mouhamed Gueye. The Senegalese forward nearly went for a career high in the first half alone, scoring 12 points on 6-8 shooting, all around the cup. His previous high was 14 in an entire game.

With the game at 42-31 three minutes into the second half, everything changed. Washington State under Kyle Smith tries to play the modern, analytics heavy game. They would like their shot chart to be clustered around the rim and the three point line. But Stanford took them out of that, and forced them to take long two point shots. Even when they were firing from behind the arc, they were heavily contested, or from the wrong guys, like Gueye. The Cougars missed 15 consecutive shots from the field, and added in a slew of turnovers for good measure.

Much of the spark was provided by freshman guard Isa Silva off the bench. Isa may not have scored a point, but he made his impact known. During that stretch he came up with three steals, an emphatic two-handed block shot, and a pair of assists. Stanford was +19 with him on the court today.

Brandon Angel scored 9 points during the 23-0 spurt, including a personal 7-0 run. The sophomore forward is becoming one of the most reliable scorers on the team, able to score both inside and out. Spencer Jones added 7 of his own during that stretch, including a three.

The final three minutes proved rocky, as Stanford was turning the ball over quickly. They also missed their share of free throws. The team sits at 65% for the year, 329th in the country. But they did just enough down the stretch to keep a multiple possession lead at all times, with Spencer, Jaiden Delaire, and Harrison Ingram all hitting important free throws to reach the final score of 62-57.

Spencer and Brandon led the way for Stanford with 16 points apiece, each shooting 6-11 from the field. Spencer is averaging 19.3 in his last four ball games, the best scoring stretch of his Stanford career. Jaiden Delaire scored 14 points in just 17 minutes after being hampered with early foul trouble. James Keefe continued his strong play with 8 points and 6 rebounds on 4-4 shooting, including a move off the dribble that I didn't know he had in him. The team finished with shooting splits of 47/32/59.

Washington State was led by Gueye's 16 points, none of which came after the 18 minute mark. Transfers Michael Flowers and Tyrell Roberts had 12 and 10, respectively. Roberts was the player in question in pregame testing, as it was originally announced that he would be unable to play. Noah Williams scored 40 in last year's triple overtime classic between these two teams, but was held to 6 points today on 2-9 shooting.

Perhaps the most encouraging statistic for Stanford today was getting a win despite just 4 points from Harrison Ingram. The freshman was phenomenal in Tuesday's win, but went just 1-6 from the field in this one. The Cardinal are finding a variety of ways to come out with victories, and they will be all the better for it as the season goes on.

This marked Stanford's second Quadrant I win of the week, and a conference-high third of the season. Washington State will need to remain in the top 75 of the NET by year's end for it to stay that way, but that appears likely.

Next up for the Cardinal is a Saturday trip to Seattle to face Daejon Davis and the Washington Huskies. Mike Hopkins's team has a good amount of talent, including the Pac's leading scorer in Terrell Brown Jr. But they've struggled to date, so even on the road this will only be a Quadrant III game for Stanford. The Cardinal could complete the rare three-win conference week.