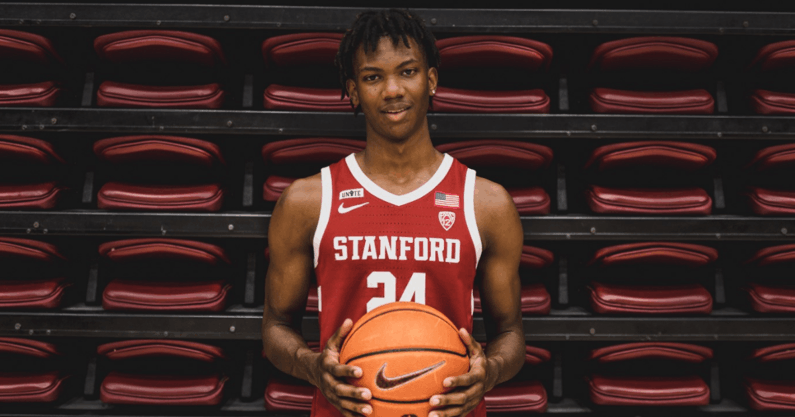 
Stanford men's basketball nabbed its second member of the 2022 class on Tuesday when four-star Jaylen Thompson announced his commitment.

The rising high school senior ranks as high as 60th in national recruiting rankings. A native of the East Bay, Jaylen is an exciting wing with plenty of room to grow into his game. He is listed around 6'7", 180 lbs, a slender build reminiscent of Ziaire Williams when he committed.

I spent last night watching full game footage of his high school team on YouTube. After all, every player looks good if you only look at their highlights. But Jaylen is impressive even with a more holistic view.

He plays his prep ball for Southern California Academy, a program founded in 2019. Almost their entire roster (including the bench) has either signed with a D1 school or will be shortly. They play a national schedule against similarly positioned programs.

The footage I watched was from a tournament called the Grind Session. His averages for the six reported games were 14.2 points, 9.2 rebounds, and 2.7 assists on 41/41/67 shooting splits. He also averaged better than a block and steal per game.

What immediately jumped out to me about Jaylen was his motor. He plays full speed on both ends of the court, for better or worse, and doesn't take plays off. One thing that's difficult for a lot of kids playing on a star-studded roster is learning how to play off the ball, but he seems to thrive in that environment. He never stagnates, and is an effective catch and shoot player.

His most Pac-12 ready skill is his shooting. On more than five attempts per game he shot an efficient percentage, both off catch-and-shoot and the bounce. His stroke isn't the purest, but it works for him. He has flashes of being a true scorer, as his handles are good for a guy his size, and he can shoot off the dribble.

A Stanford player comparison for Jaylen to me is the aforementioned Ziaire Williams. He doesn't have Ziaire's mid-range polish just yet, but he's a long, lanky wing that can shoot the ball and shows flashes of being a three level scorer. Like Ziaire, he needs to get stronger and work on attacking the rim. He attempted only 2 foul shots per game at the Grind Session. Also like Ziaire, he has the ability to turn defense into his calling card, even if he's not an elite defender at the moment.

Jaylen strikes me as a multi-year player, but one that could continue blossoming throughout his time at Stanford. He should make the most of that, as he is a 4.0 student who made education a big part of his decision.

In an interview with On3, he stated another important factor in his choice: "Stanford can really develop their players, especially with their bigger wings."

Recently Jerod Haase has put KZ Okpala and Ziaire Williams into the NBA, and recruits are paying attention. Another bigger wing that has continued to develop is Spencer Jones.

Jaylen joins Ryan Agarwal in the class of '22. They will fill at least one more spot.