What It Means to be Back in Omaha 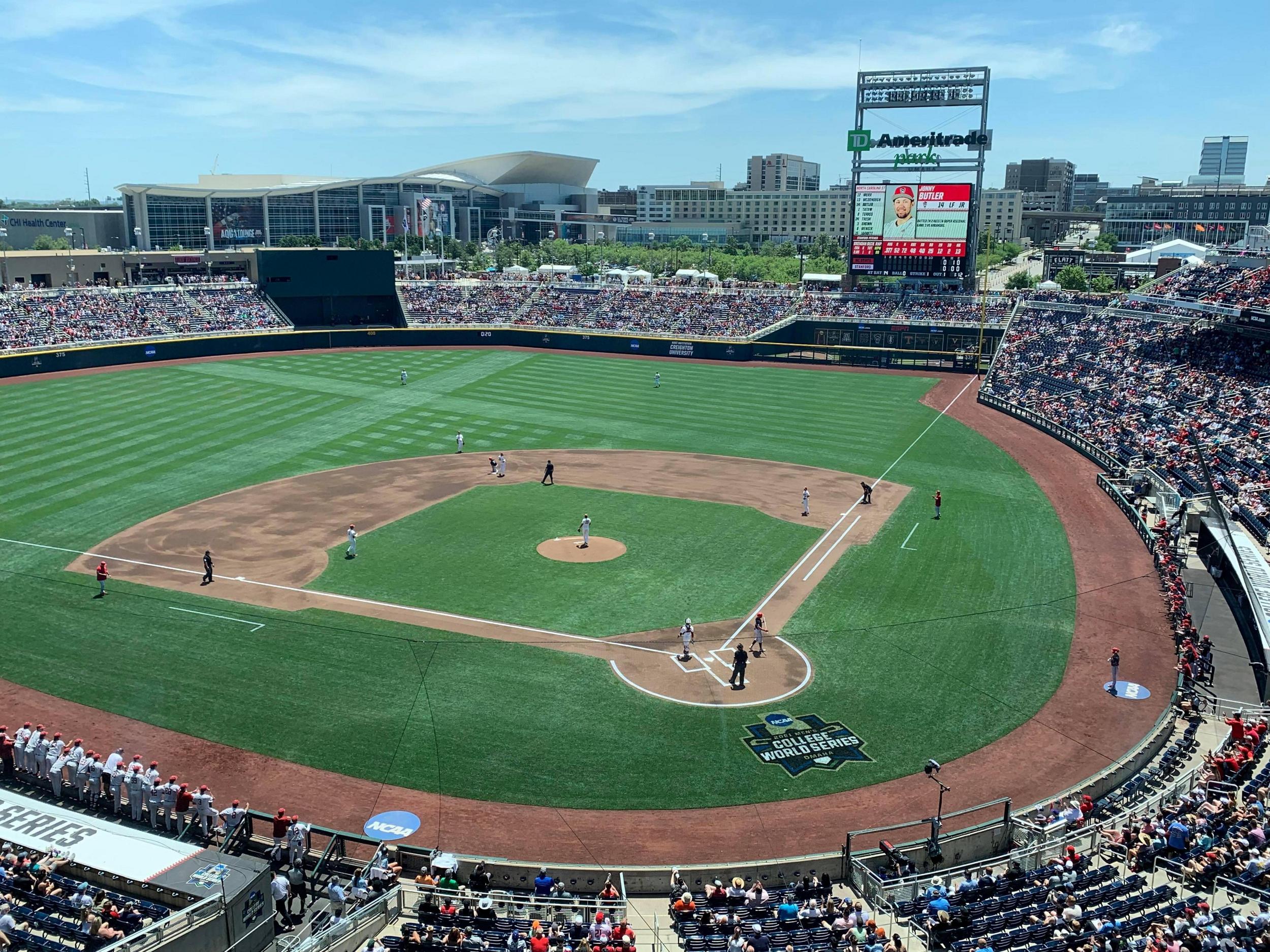 Breathe in that fresh midwestern air, feel the blaze of the Nebraska sun like so many crops here do. Now exhale. You're in the holy land of College Baseball.

From the press booth in TD Ameritrade Park, the skyline of Omaha, Nebraska is in full view.

To my left are the twin spires of the Bob Kerrey pedestrian bridge, undulating wavily across the Missouri River. Its dual spires (twin peaks?) hold the handfuls of cables that connect Nebraskans to their Iowan neighbors.

Straight ahead is the CHI Health Center, a behemoth indoor arena with glass sheets and intersecting metal beams that give its face a familiar graphing paper look. Deep within its walls, future Olympians are swimming last minute laps ahead of the time trials that print gold tickets to Tokyo this summer. Just a week prior, Katie Ledecky was graduating by the very same pool.

Turn your head further to the right and you'll glance a Hilton high rise, a Marriott mansion, and a collection of middling skyscrapers like the Toast Tower, where restaurant tech is made. Beneath the skyline, increasingly outlined by a descending sun, the 22,193 fans in attendance are slowly trudging out of the park, being replaced steadily by blue-shirted, straw-hat-wearing field crews collecting bases, shoveling white sand, and smoothing the infield.

In the left outfield, the Stanford Cardinal Baseball Team huddles up, still processing the 6-4 ballgame that quickly became an ugly 10-4 mess at the Top of the 9th. We’ll see the Card again on Monday either against Arizona or the reigning champs, Vanderbilt (UPDATE: it's Arizona).

Despite the loss, there's an inescapable quality of specialness permeating the air. Stanford is finally back in the College World Series after a 13 year drought, despite some teams that absolutely had the firepower and polish to make a run (looking at you #2 overall 2018 team).

Moreover, Omaha is finally back, after a year of pandemic-cancelled NCAA spring sports that left this city and its crown jewel baseball park (designed for this singular annual event), uncharacteristically empty.

I see a pedestrian bridge packed with wide-eyed, shoulder to shoulder spectators gaping and pointing at the Missouri River swirling beneath them.

I see a modern coliseum hosting Olympic trials for tens of thousands of spectators, roaring for champions who will ultimately be selected to travel abroad and compete in front of even greater crowds.

I see packed hotels with lights twinkling from room to room, bars with familiar thumps of popular music and clinking glasses, stores and merch tents earning scuff marks from foot traffic hordes. There is a spark in the eyes of this great American City again, its famous collegiate tournament a certified health potion after the most vacant of years.

The Stanford huddle breaks from the post-defeat pep talk. But shoulders are not slumped, nor strides languid. Juice, adrenaline, excitement, magnetic waves emanate from each player as they head to the locker room and prepare for their next game. They're humming the same grateful tune as the City of Omaha: "It's good to be back."

There's a reason they call it America's City. This team has the ability to battle back, hopefully this is a long trip