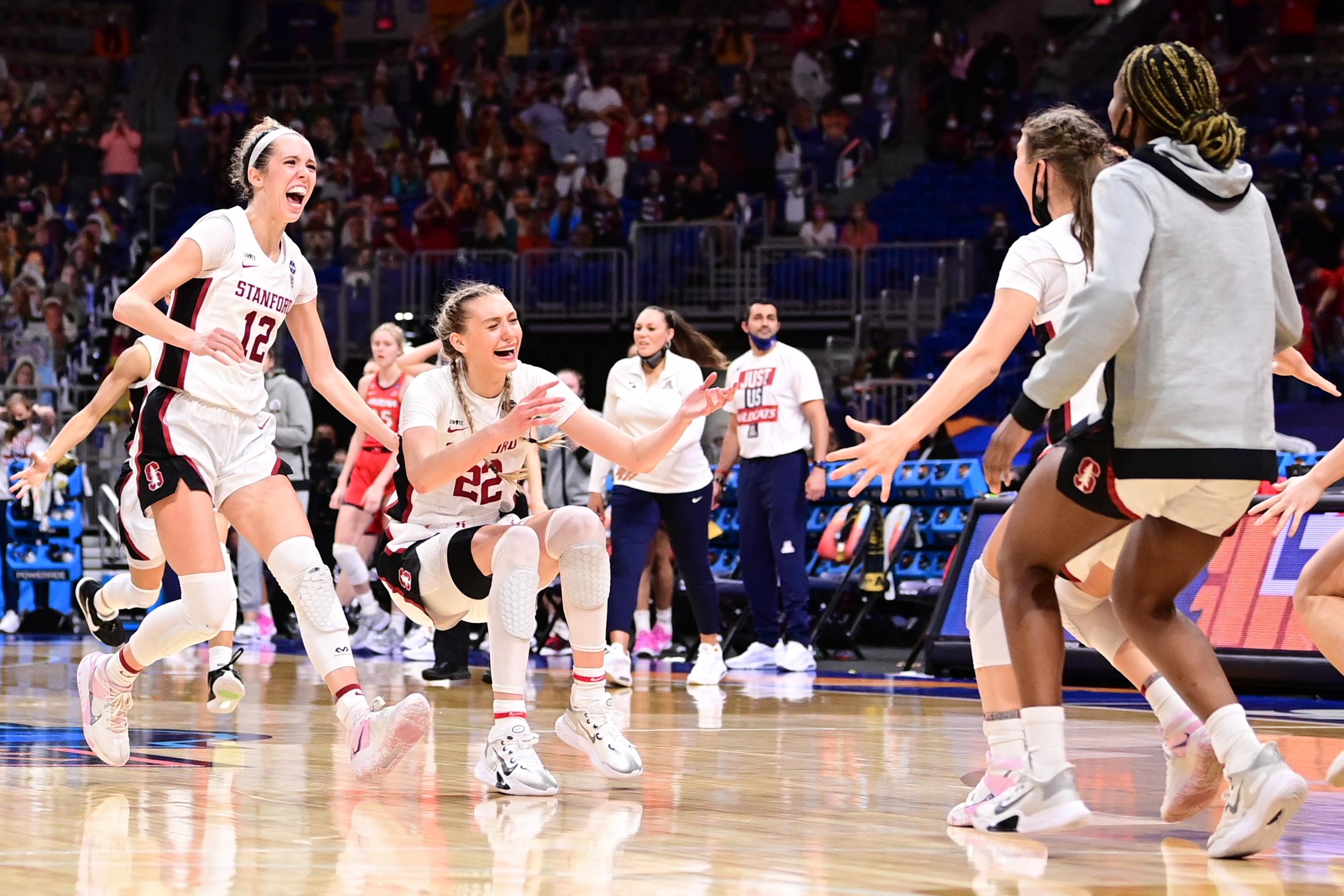 
Bowie. Crockett. Dickinson. Travis. These names are larger than life in the lore of San Antonio, but they are but pseudonyms. Today we refer to them as Haley Jones, Lexie Hull, Kiana Williams, and Tara VanDerveer.

This season was never a given. Colonel VanDerveer told her team they may never see their loved ones this year. They all sacrificed greatly for the opportunity to battle, side by side, arm in arm, in these hallowed halls. The team’s leader drew a line in the sands of Santa Cruz, giving her warriors a chance to return to see their families instead of continuing on this ceaseless road trip. Not one crossed the line.

There was hardship. Setbacks aplenty came and went. But none of our proud members batted an eye. The goal always remained the same. This team would find glory in the Final Four in San Antonio, or die trying. Entering Sunday, that lofty goal finally seemed within their reach, with one final and familiar nemesis remaining.

Aari McDonald rode in gallantly like General Santa Anna 185 years prior. Her unwavering ferocity and unwillingness to take prisoners presented a formidable foe for our heroes. Many regiments (UConn, Indiana) had tried to rebel against her reign, but their coup attempts were expertly quashed.

Throngs of Arizona fans outnumbered our revolutionaries ten to one. U of A chants bugled through the halls of the Alamodome. With their backs against the walls, our unit dug deep. Each member had a role to play. They knew as much, and were prepared for the Wildcat siege.

Defending a fortress is never an easy task. The clever McDonald probed, looking to penetrate the walls every which way. Lexie Hull, Anna Wilson, and their sisters in arms did all they could to cut off her repeated attacks. The diminutive Wildcat was forced to bomb away from a distance, and found it difficult to find the target. When all was said and done, her accuracy was a mere 5-21.

Things were touch and go for the entirety of the battle. The Arizona onslaught never let up, but the Cardinal gunners of Lexie Hull and Ashten Prechtel hit their marks. Haley Jones repeatedly sent her opponents reeling. As the clock slipped toward zero, they still needed to withstand one final charge.

Five seconds. McDonald caught the ball. Four seconds. She drove toward the goal, and crossed over en route to the top of the arc. Three. Two. She looked to get deeper into the Cardinal defense, twisting and turning before quickly retreating. One. With the realization there was no clean look to be had, she threw up a prayer. Zero. The Hail Mary went unanswered, and the Wildcat masses were, for once, silenced.

Years from now, when classrooms of school children come to the Alamodome and take the audio tour, they might not believe the events that transpired here today. The blocks of one Cameron Brink, the paint finishes of MOP Haley Jones, the leadership of Kiana Williams. Sometimes history reverses course. Today’s Santa Anna rode in on a high with all the numbers in the world, but our Bowie, our Crockett, our Dickinson and Travis, hung tough, stood tall, and successfully defended the Alamo(dome).

And that’s something we’ll all remember.